Nazis at the Center of The Earth Movie Review 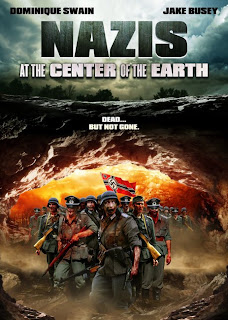 Above Pic: Poster for Nazis At The Center Of The Earth


Leave it up to to the twisted minds of The Asylum to think up outlandish plots and hysterical and ridiculous titles. Nazis At the Center of the Earth brings it to a whole new level. There two styles of camp films, some are so bad it is good camp films and just plain bad camp. "Nazis", as I will call it from now on, falls into category three, sublime and absurd.

Filmed in the standard limited Budget afforded to The Asylum flicks, "Nazis" provides Jake Busey leads a crack team of explorers to search Dr Morgan (Dominique Swain) and her partner Mark who are lost performing medical research. I must say with each passing year Jake is looking and more and more like his father and the madness shall live on! hahah

Such classic lines like, "Why is this Blue?" and "You have no Idea how deep that shaft is!" And my favorite irreverent bit of insanity, after sending in Lucas the first guy vanishing into the shaft and the female crew member speaks up and says "Send me in next, I am lighter" (the response the team leader is) "Are you Sure"  her response is: "I'm Norwegian."   More script gems permeate this silliness. There is blood, some and obviously the Nazi soldiers are performing medical experiments.

The acting, based strictly in The Asylum standard, is a bit above average, the highlights being Dominique Swain,  Dr Mengela played by Christopher Karl Johnson, and the cute, sprite newcomer Lilan Bowden, who plays May Yun. I liked Lilan's line delivery, she did not force her dialogue and seemed to enjoy herself, and showed natural emotion when lead into the notorious showers! 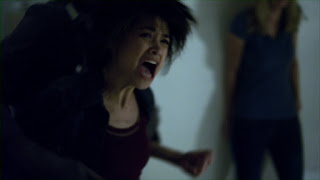 Above Pic: Lilan Bowden as May Yun, may be small but she is is cute, loud, scared, and soon to be scarred! (C) 2012 The Asylum


The entire gang of doctors are captured and forced to help the enemy complete the research and keep the Nazis alive. Of Course there is nudity and torture. The old Nazis are kept alive by merging machine and metal, so one can see where this is going hahaha. Merging diverse styles of film is unique in Nazis, I must give the Production staff credit for this and shoehorning so many types of films in 90 minutes.

At exactly 57 minutes in the big reveal, the epitome of German engineering and no it is not a BMW, a new world order that will spill guts not in blood but in laughter. I won't spoil it, but hot damn hilarity! I do believe "Nazis" is a send up on The final sequence of a certain recent Spielberg film mixed with a James Cameron one and has more cheesy CGI effects then all of The Asylum Films put together!

Overall I give "Nazis" a 6 out of 10. Worth a watch. On the DVD reside several insightful and often silly video features such as pre-production, cast and location snippets, and the usual 2 minute Asylum gag reel, as if the whole film is not one.