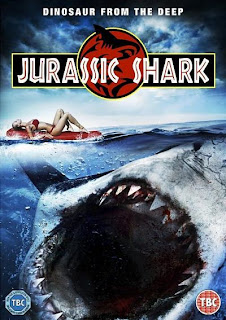 Haha, you Canadian rascals you, not sure where to begin on this blast of Canadian insanity known as Jurassic Shark. Director Brett Kelly's Jurassic Shark opens with the obligatory bubble-headed girls out for a calm sun bathing, and of course they are eaten by the unseen shark. The dialogue in this film is decidedly juvenile and I am positive that was the intent, or at least I hope it was.

It turns out that there is this research scientist, who happens to be wearing a dirty and rather ill-fitting lab coat saying he can explore for new oil wells, all be it illegally, and accidentally drills and uses dynamites too deep, and unleashes a 50 foot terror that has a penchant for eating young nubile human flesh.

At 75 minutes including credits, Jurassic Shark at times is a bit slow moving, but the final 30 minutes are rather entertaining as the surviving three girls have to contend with a trio of villains who are after their stole artwork, which was lost when their rowboat capsized, due to the shark pushing it over.

Yeah I said row boat, apparently their extreme getaway plan calls for a 8 foot boat that under human power can reach such ludicrous speeds of 4 to 6 miles per hour.In fact no one on this island owns any sort of motorized vehicle, might be a good way of actually getting off the island.  As stated before, I had to laugh, Jurassic Shark is pure silliness. Sometimes, there are some rather slow parts in Jurassic Shark, especially when the group is walking to find the research station. 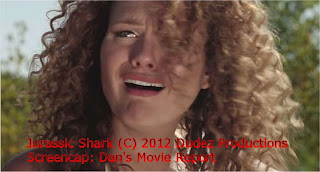 The special effects are no worse than some of MTI or films from The Asylum, but the dimensions of the shark seem to change with his distance from the victims. Some of the acting, especially from Christine Emes as Tia, and leader of the villainous art thieves Angela Parent as Barb is decent for a low budget film. The two ladies displayed a variety of emotion and did their best with a script that was very much on the ridiculous side. For those who are slagging the film, cause it has no nudity, come on, get a life and a live girl to make love to, yeah I said it!

Overall, I would have to say a cautious rent, ONLY if you like sardonic low budget silliness. I am a sucker for low budget schlock cinema, Jurassic Shark rates a sexy Canadian girl chomping 5.5 out of 10. I rate the sultry Christine Emes, who is a spitting image of the frizzy haired, 90s version of Dina Meyer, a spicy hot 8.5 out of10! Apparently the folks at the Dudez production company have more insanity on the way with their release of My Fair Zombie! For more info on Jurassic Shark chum your browsers over to their facebook page @ https://www.facebook.com/pages/Jurassic-Shark/203007103092025

For the person who commented anonymously, please come out of the shadows, you won a prize from Dan's Movie Report, please send email, also in the mean time read my interview with Canadian Actress/Stunt-woman Monique Ganderton! http://dansmoviereport.blogspot.com/2012/01/monique-ganderton-interview-c-2012-dans.html  Actually love Canadian film and action!
Posted by Dan's Movie Report-Danny Templegod at 6:21:00 PM