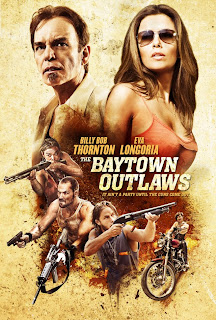 Above Pic: Poster for The Baytown Outlaws

Yes! Time for a bit of grindhouse style fun. Bringing home the old school pulp cinema wildness, is The Baytown Outlaws. The film follows a group of no good rebels named the Oodie brothers, a gang of misfits, who are murderers, thieves, and general bad dudes. This film has the stamp of a Tarantino production, fast paced, ultra-violent, and sarcastic.


The film opens up with a wild shootout and flails out from there. Watch for sultry Eva Longoria as Celeste wants to hire the gang to get her godson back. Also in the mix is drug dealer Carlos portrayed by a smart ass talking Billy Bob Thorton. Billy Bob has the best lines in the film, such as how come nobody uses finesse anymore right before the

Of course things are more confounded than they seem because the brothers have to go through Billy Bob's gang to get her Godson back. After a massive shootout, the rest of the film is full of revenge and violence.

In the mix is a sarcastic police sheriff Millard, who could actually care less about justice. Millard, (Andre Braugher) looks a blind eye to the gang. Even helping the gang to rid the streets of criminals by using the gang's services.

Above Pic: Sexy and dangerous Zoë Bell out of the brothel, straight into the violence! (C) 2012 Universal Pictures

Adding some spice added to the mix is an ultra sexy and ruthlessly violent group of thugs. A motorcycle gang to rival Sons of Anarchy, except far better looking, sorry Ron haha! This group of biker umm.. ladies,  actually more like salacious vixens, are lead by a dark haired Zoë Bell as Rose. These sweet girls do Carlos's dirty work, supposedly by diving and conquering. Carlos sends the ladies to destroy the Oodie Brothers gang. Carlos calls Celeste and states: "I sent some really awful bitches to handle the situation." Billy Bob then threatens "Once they track down your fella's it is not gonna be a bloodbath it is gonna get fuckin' sexy." Just as side review comment, where do these gangs of sexy ladies hang out, can they be rented, from, say a Redbox hahah? Ms Bell and her ladies deliver the sex, the violence, and most importantly the overly tight lingerie hahahah!

Above Pic: Billy Bob as Carlos calls in a favor. (C) 2012 Universal Pictures


The acting is solid, the guys are supposed to be rebels, and as an audience we are thrust into their world complete with sepia tones, redneck dialogue, and off kilter actions. Billy Bob is back on top with his attitude and mannerisms. His sardonic tone is a perfect mix in The Baytown Outlaws.

The Baytown Outlaws is a fast paced ride; full of bad attitude, curse words, crude behavior, and violence. It is highly entertaining. Do not expect polished art, but worthy of a purchase, I rate this over the top coolness an 8 out of 10. Buy it!

Amazon has it right now! Makes a wonderful Christmas gift!