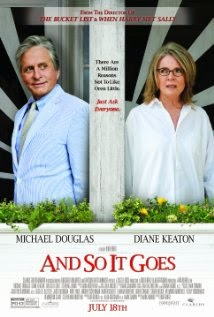 Above Photos: Poster for And So It Goes and my Press Ticket!


Greetings fellow movie watchers, I know, you are asking Dan's Movie Report and romantic Michael Douglas and Diane Keaton Movie. And So It Goes is one diverse and twisted tale of love lost, love rediscovered, and relationships in general, all wrapped up in the package of an absolutely hysterical comedy, about the trials and tribulations of life.

Michael Douglas has portrayed so many diverse characters in his career, but in Rob Rieners's comedy he is forced to fully flex his acting muscle as Real Estate agent Oren Little. Juggling the raw human emotion in the beginning of the film visiting his dead wife, all the while cursing under his breath, why did she have to be buried on a steep hill. And So it Goes, flows like water, with Douglas steering the ship the audience is never far from the metaphorical shore as he soon meets up with his lounge singing neighbor Dianne Keaton.

The pair grow close when his son is of to jail and they are forced to look after his ten year old daughter. Learning to love again was a difficult chore, but as the movie progresses, the hard heart character turns to butter, as he shows true affection for his granddaughter, eventually his son.

Keaton plays a tortured soul living in the past and crying at the drop of a hat when she sings a sad song or thinks about her late husband. Keaton's natural quirky mannerisms work solidly in And So It Goes, she is the emotional one to the more stoic Douglas.

Watch for some cool side characters, Rob Reiner plays a toupee wearing piano player in Keaton's band. Frances Sternhagen plays the snarly Claire, an longtime employee of the real estate agency Douglas works for, she always has sarcasm at the ready, and is absolutely hysterical. Props to the dog in the film, serious, his comedic timing was top notch, plus he can poop on cue, trust me watch out for that!

A final mention goes for again the fantastic direction of Reiner, coupled with the great acting from the two leads. Keaton and Douglas are pros, but in And So It Goes, looks like a bit of real emotion played out. Fleshing out detailed characters is difficult, and Reiner does this with ease. Not only are the characters likable on the surface, they are dealt with on a deeper level. And So it Goes, is a memorable film that will have audiences talking about that. The screening was completely full and the audience reacted with laughs all the way through followed by many applause at the end.

Overall, And So It Goes is a great way to spend an hour and a half. Yes guys will like it, there is just enough raunchy humor tossed in to keep us men interested, balanced with the romantic stuff for the ladies. I do reccomend this film and rate And So It Goes an 8 out of 10.