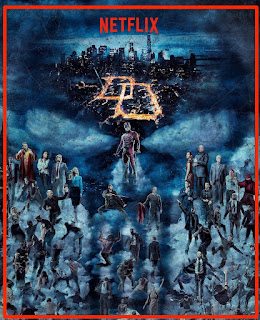 Blasting into Netflix on March 18th Daredevil season 2 ramps up the intensity with two additional main characters Punisher and Elektra. My odd method of watching,: a total binge all 13 at once, however I actually started with episode 5 because that is the real moment Elektra is in play. Thus I watched 1-4 after 5-13. The review contains minor spoilers but will not reveal any major plot points.

Developing two new major characters in a series in one season can often prove tricky. Especially when furthering the development of the existing characters in a series. The best part of the Elektra development, is a (Minor spoiler) we see a young Elektra training. The development of character is not linear; but organic, a bit like a cause and effect. Going further into Elektra, she is given vulnerability, but we also see her cold assassin side, she actually is the most brutal character. Here is how I see it. Daredevil, aims to not kill, Wilson Fist AKA Kingpin kills for power and money, Punisher Kills for revenge for those who killed his family and sweet Elektra kills and had her first kill at 12 because she enjoys it! Any questions talk to THE HAND hahaahah! 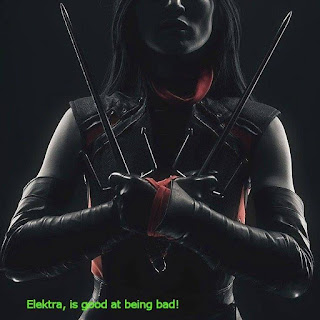 Above Pic: It is the dark end of the street if you cross paths with Elektra! (C) 2016 Netflix!

Elektra is portrayed with dichotomous emotional diversity by Elodie Yung. There is
a bunch of meat to chew on in her story arc and trust me, if she wants you dead, you will be. My favorite scene is when she meets with a perspective french assassin, of course the dialogue is in her native French, and he tries to seduce her and she figures out he is sent to kill her and smiles “let's get on with it”. She has copious fight scenes, and credit given to her and her stunt double Lauren Mary Kim, for putting on an expert display of action in a wide variety of Martial Art styles. Watch for a future interview with Lauren on Dan's Movie Report! Because Elodie has a martial arts background in karate, and extensive training from 'G.I. Joe: retaliation' she is well suited for the action. Elodie's dramatic skills are put to full use when in romantic interludes with Matt Murdock, and when she is injured she shows almost a childlike face when being carried to bed. Elodie was one of the 3 finalists for the Wonder Woman job, but this role suits her to a T, and allows her to delve deeper into a complex character.

The Punisher is also a nice addition, throughout most season two the writers keep the Punisher and Elektra stories separate. Obviously the creators set up characters to grow and do not look for comic book style costumes at the outset.
The audience gets an extensive background look inside the Punisher. Jon Bernthal really has nailed all of the conflicted iterations of the Punisher character in his performance far surpassing anyone else tackling the role. The Punisher needs depth and Bernthal respect for the source material

Another improvement is the furthering development of the Foggy character, He is forced to work alone on the Punisher trial because Daredevil is pre occupied with the sultry and mentally unstable Elektra. Add a sprinkling of Rosario Dawson's soul full (Claire Temple) again, not as promanent as season one.

Check out this shot of The Kingpin! 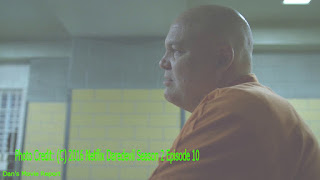 With regards to the fighting the actors and stunt doubles follow a brutal fight path layed out expertly by stunt and fight coordinator Philip J Silvera The action is virtually seamless from transition stunt double to actor and back again. One of my favorite fights is Elecktra vs one of Stitch's assassins in an airplane hanger, at the end of episode 10. check out this Capoeira inspired bad assery! Like I said am an not going to spoil the outcome but will point my readers to some highlights.

Complaints aside from people that feel that the story is setting up the next series, but of course it is DUH! People are complaining on IMDB that Elektra is interrupting the Punisher story arc, this is Daredevil, in fact Elektra is more intertwined in his past than Punisher is! If you want simple, watch Supergirl, basic network fluff.

This is a series not for kids under 15, to be honest, the concepts and violence are very dark, and intellectually Daredevil forces the viewer to be engaged in the minute details of the characters.

The entire season feels like one long 13 hour film, as one episode ends in a cliff hanger and the next one begins exactly where they left off no recap needed as the entire series drops at once. As a viewer in my this is the best way to see if you are going to like a show, you do not have to wait 3 or four weeks, you watch a few episodes over the weekend or anytime, if you do not like it on to the next. Networks rely on ratings, but they put their shows online so you can just wait till the season ends and binge watch. Watch for: some cool prison scenes with Kingpin, crazy ninjas, and general mayhem throughout season 2. 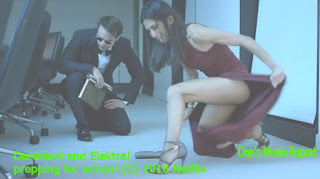 This is probably the most violent original program on Netflix at the moment, blood and guts wise, as The Hand is a violent subversive organization, obviously when the rest of the marvel series ties in we will see. Prob a stand alone Punisher series in 2018, perhaps a 2 Elektra Movie rather than 13 hours of a series, so many possibilities, just have to watch. I enjoyed season 2 far more than the first season, characters grew, we meet some new ones, and a strong female character like Elektra is in Daredevil's life and she is there to torment and delight. 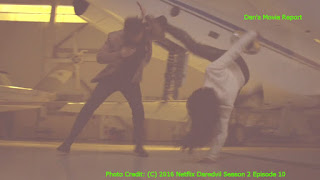 Before I close this review I will make a statement and a commitment to offer firm support to the entire stunt community, as this is a category that is NOT represented in the Academy Awards in any way. Please point your browsers to the Stand Up For Stunts community on FB https://www.facebook.com/Stand-Up-For-Stunts-714286178593690/ and support these fine performers. Here at Dan's Movie Report I feel that this is an under appreciated area of the press, thus in the coming weeks look for interviews with Elektra's Stunt double and all around awesome ass kicker Lauren Mary Kim https://twitter.com/LaurenMaryKim , and Stunt and Fight Coordinator Philip J Silvera!

I rate season 2 of Daredevil a must watch, 10 out of 10. Elektra I rate lovely dangerous, and fun, and she does not have to break into my house to find me, I will leave the door open haha!! Elodie and Lauren kill it!

All of the main stars of the cast kick ass and are very active on social media.