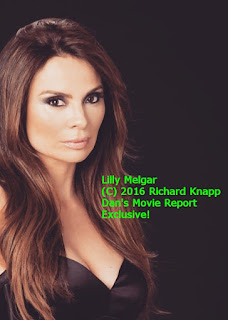 Greetings valued Dan's Movie Report readers, four years ago I had the distinct pleasure of interviewing Lilly Melgar following the release of the film she produced, entitled 'Black Cobra'. Fast forward to 2016, and my ass deserves a beating for not connecting with EMMY winning producer Lilly Melgar earlier. Lilly chats about her EMMY winning series 'The Bay' among other projects. This interview is just the beginning, watch for more as soon after her new series 'Ladies of the Lake' comes out, until then it is damn time to get inside the creative mind of Lilly Melgar.
DMR: Lilly, the series 'The Bay'; which you are one of the producers and star in the series as Janice Ramos recently won a Daytime Emmy, pretty amazing, as when the show started their was no award for digital series. What are your thoughts about winning an award and the landscape of digital content today?
LM: When we began we knew this was the future. We knew it was something 'special'. We have now won 2 Emmys for best digital series, 2 Emmys for best actor and actress on a digital series and 8 nominations total, including my very first Emmy nomination as an actress this year. I also won my first Indie Series Award for best actress this year for my told as Janice. … Did I or 'we' know it would turn into all of this? No. I am in awe of how much this little community/industry has grown, at how far we've come and how it still feels like we've only just begun. 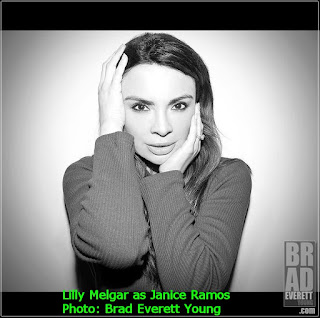 DMR: Congrats again on all the awards and nominations, long overdue. Chat about your character on 'The Bay' Janice, what is her motivation, and do you see some of yourself in the character?
LM: Janice is a complicated character living in inner conflict. She wants to do the right thing but is driven by her emotions and need for love. She has always been driven by love and it's only brought her loss and pain. After her brutal rape, it is time for Janice to go within and clean house. She needs to heal and focus on herself. This is a major turning point for this character.
DMR: Chat about the differences on acting in a network daytime soap vs a digital soap, more freedom, etc...?
LM: I found my home and my way as an actress in this medium. I live for the freedom of expression and space it allows. There's an intimacy that simply can't be captured on the daytime network medium... I love shooting on location, how you're able to capture every breath .. Every sigh .. How you get to live in a space .. My passion for this craft is getting to express the human condition .. To do that to the best of one's ability you need to get rid of limits, censorship .. Anything that confines you ... In short ... I love everything about this experience.
DMR: I fully agree, the digital medium has opened up to more creative avenues. Chat about being a producer on the series, what are some of your behind the scenes duties?
LM: I love producing on the series. I get to overlook wardrobe, make up and all things beauty related. I'll sit with our director, Gregori J Martin when permitted and be his second set of eyes. I help out with sponsorship and post production. I also got to co-direct our new opening sequence. We're a team. A family. As producers, it is our job to put out the fires that inevitably happen during a shoot so the director can direct and actors can focus on acting. A few of us producers are also actors on the show so on those days we are only allowed to focus on our acting. We have a system that gets better every time.
DMR: Lilly, you started emotional fires on 'General Hospital', yet you put them out on 'The Bay' haha! Shifting gears, chat about the 'Soapbox' show, how did the idea come about? Working with Martha must be a blast, the episodes are light, and fun, and you are able to get some interesting guests.
LM: I was offered a show at TRadioV and I didn't want to do it alone. I had just shot some guest appearances on a segment called Soap Dish and the times Martha and I were on together were completely engaging. Both opinionated women that respectfully disagreed. The chemistry was undeniable! So I came to her with the offer and idea of having Soap guests since that's the world we knew and came from. She was pregnant at the time and resisted but I 'persisted'. (lol) She came up with the name and began producing 'Soap Box with Lilly & Martha'. The rest is pretty much history. We instantly created a space for our guests to just come and hang and for our supporters to get to know the person behind the 'persona'. We love our Soap Box and each other very much. That's why it works. Well, she is one hell of a producer … that helps :).
DMR: I really love the show, the guests on it are fun, How about new episodes, I know you have been pretty busy?
LM: We feel awful that we've been forced to take such a long break. I can't give you a return date but just know we miss it as much as you all do! 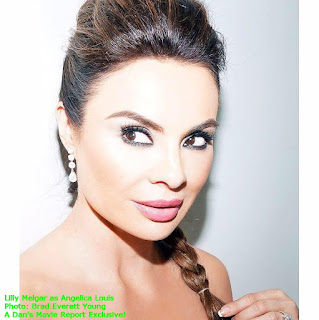 DMR: I look forward to the return of the show. Chat about your new series 'Ladies of The Lake' and your role of Angelica Louis. How did you get the part, and chat about the filming process, any cool behind the scenes stories?
LM: I am ridiculously excited about "Ladies Of The Lake". I absolutely loved everything about this project and experience. The script, the team, the work, the people … everything was just 'magical'. The producers, Michael & Barbara Caruso and Kyle Lowder ran a tight ship. The attention to detail and care was impressive. Our director, Sonia Blangiardo was nurturing and effective. As actors, we all had epic chemistry and all showed up with our A game. When everyone is 'that' good, it ups your game. I can only imagine the results. I am dying for this to come out because I know our supporters are really going to enjoy it!
DMR: I saw ADR is being done for 'Ladies Of The Lake', is there a release date for the series? What digital outlet?

LM: No release date as of yet and the outlet is yet to be decided. 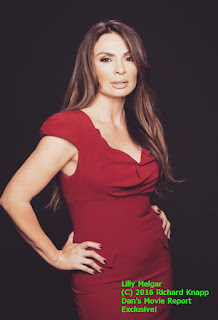 LM: I also have a romantic bilingual comedy coming out in theaters later this year. It's called "Tongue Tied" and I play Marta. The very first acting gig I booked was for a TV pilot in Spanish. I felt like my life had come full circle when I finally again got to act in my native language. So happy it's coming out this year.

Thank you so much for taking time out of your hectic schedule to do this interview. Keep reading Dan's Movie Report for more exclusives.

Check out Lilly on her exclusive site @  www.lillymelgar.com

She has a cool organic natural product line called Scent By Lilly  @ http://youtu.be/e23WS2zB0zA