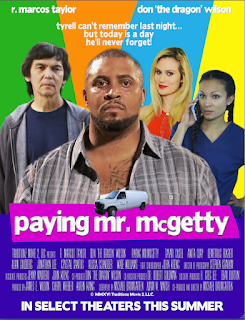 Greetings valued Dan's Movie Report Readers, the second half of my 5000 mile round trip odessys back in 2003 with my first meeting of Don (the Dragon) Wilson back in 2003 it was a oh so brief hello so short I never even brought it up when I met him last Sunday at the Worldwide premiere of his new flick 'Paying Mr. Mcgetty' His friends list is full but I do not like to reach out to someone blindly. Back when The Martial Arts Kid came out, which I enjoyed as it was a family film and partly shot in my home state, I wanted to go to the filming as I have known Cynthia Rothrock for close to 20 yrs. Things did not work out, I saw the film grow and grow and I was impressed how a small flick could have an impact and I started chatting online with Stunt Woman and actress Crystal Santos and when she told me it was the only one of Don's Films she could take her kid to see hand he has so many, I was like wow, you are right.

Whew fast forward to 2016, I saw that 'Paying Mr, Mcgetty' through the services of Don's brother James is coming to fruition and stars Cynthia Rothrock , Tara Cardinal are also in it along with the lead actor R Marcus Taylor. I thought the diversity of the film was intriguing enough for me to follow up further with so many of it's stars confirmed to attend I asked James if I could come, he was like are you going to cover the film I was like sure you do realize I am in Florida, he did.

I am so used to in this day and age to just reviewing a film in peace and quiet, but I knew that with two premieres coming in the same weekend I had to take action. I regret a few things, not reaching out to more of my L.A.. contacts, though I kind of wanted to surprise Tara and Crystal. I knew that some of the others I interviewed are scattered around the world and many I just did not want to bother. Please do not be mad if I did not contact you!

On to the film whew! The film screened as part of the closing film for the Burbank Film Festival, and screened at the AMC 16 in Burbank, similar to the Widescreen Fest as AMC seems to be receptive to those things. A few noticeable differences from Action on Film Fest. The festival was worked out with the City thus they had programs for free handed out upon entrance as Action on Film's were a small 2 dollar purchase. But were upstairs and the theater was downstairs. The films in Action on Film were on files the short films rather than dumping on disc, minor stuff, but as a festival judge for the Widescreen I see these things. Again though Action on Film is indie, which I love!

'Paying Mr Mcgetty' is a colorful collection of diverse and quirky characters. As this is an initial review I do not want to spoil the plot. R Marcus Taylor plays a dry cleaning delivery guy and Paying Mr. McGetty follows a day in the life like 'Sideways' is my closest comparison. It works! Don Wilson plays a quirky bad guy hit-man, but he is unsure of taking the job. We see a room full of hit-men and learn of their quirks and the cool thing is there is never belly laughs but the tone is snarky and sarcastic. Rather than run after Marcos character, Don is shown like evilly stalking haha like it is a cat and mouse game.

You see a colorful scene in a barbershop, some general but subdued things happening to him, but the thing is I do not want to spoil it. R Marcus Taylor really steals the show here, I am proud of Master Wilson to showcase another actor in such a way. All involved worked hard for this one, even the side characters such as the evil Crystal Santos another lurking hit woman with a knife, Crystal has a power look and unlike the thin waif ladies, she can really kick ass, but no fighting here. Tara Cardinal and a group of bad friends! I mean it was cool to see them NOT fight! To kind of poke fun at some society quirks and just in general be snarky! HA! There is some action of course but it is not the main focus, which is cool. All of their character names are listed on the FB site! So yeah like it! Check out some cool cameos including Cynthia Rothrock!

Please like the Facebook page for more info:  https://www.facebook.com/PayingMrMcGettyMovie/?fref=ts
Also the IMDB page @ http://www.imdb.com/title/tt5220724/?ref_=fn_al_tt_1
The links will have the detailed character information.

The leads are great! Anita Clay and Alissa Schneider slide in and out of each scene, and allow a flow. Alissa plays daughter of a mob boss, and is thrown into the chaos a bit, and some of the scenery!

Well that is all I will say for now! I promise a more in depth review when the film is closer to release date, my initial thoughts are a strong 7 out of 10. I would say by if you are a fan of quirky comedies like 'Sideways' and irreverent humor shows like 'Big Bang Theory' and 'Friends'. This is no typical flick! Dare to be unique!

Enjoy photos and thanks to James Wilson for facilitating my entrance, and re-introducing me to Don, respect!

Watch for much more on this film including exclusive cast interviews closer to the time of the actual release!

Update August 20th 2016: 'Paying Mr Mcgetty' to have world premiere screening Come join us for the World Premiere of PAYING MR MCGETTY! The premiere will be hosted by the BURBANK INTERNATIONAL FILM FESTIVAL

Greetings valued Dan's Movie Report readers, Producer, actor and brother of Don Wilson, James Wilson reports that 'Paying Mr. Mcgetty' is in the final stages of production. Check out the Facebook page for updated information that is flowing in fast and furious @ https://www.facebook.com/PayingMrMcGettyMovie/