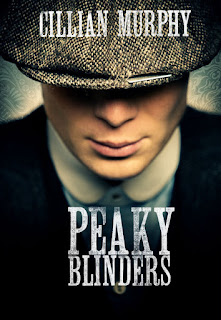 
Greetings Dan's Movie Report readers. Netflix is really on fire with recent shows, one thing though is perhaps the hidden gem of a show 'Peaky Blinders' is on the back burner of people's minds and thoughts. Trust me,  it is binge worthy and three seasons of 6 episodes per season means in a mere 18 hours you can be all caught up!

This violent gangster series set in the year after WWI in the U.K. follows a band of gangsters, the Peaky Blinders and their exploits, money laundering, illegal gambling and horse race fixing. Thought this might seem run of the mill, this family does not take kindly to outsiders and have as many enemies as policemen on their payroll.

Actress Helen McCrory plays Aunt Polly, she is the financial advisor to the gang and takes the lead when things get hairy. McCrory just kills this role, of the damaged character, complete with flaws of drunkenness and general wicked behavior. She oozes sex appeal while maintaining a dangerous persona.

The leader of the gang is Thomas Shelby, a young upstart played with reckless chaos by Cillian Murphy. He stops at nothing to drive his point across, and as ruthless as they come.

'Peaky Blinders' has deep atmospheric elements and strong character development. There is much action, but even more thought provoking dialogue. When a character performs and action, there always is an explanation for it.

The acting and directing are top notch, all of the characters move through the various sets, with purpose and conviction. Watch for Sam Neill as Inspector Chester Campbell in the first couple of seasons. He is a complete hard ass, who has it in for the Peaky Blinders, but they seem to be one step ahead of him and he gets frustrated. He has some memorable scenes with Cillian's Thomas Shelby character, keep an eye out for them.

This is a very violent production, not for kids, I am not even sure kids would want to watch anyway due to the subject matter. That being said, 'Peaky Blinders' is fantastic, and one of Netflix's best shows, rating a 9 out of 10, a must watch.