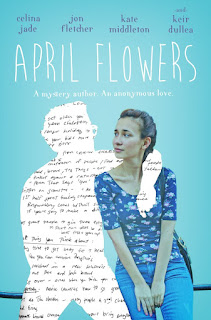 Above photo: poster from IMDB

Greetings valued Dan's Movie Report readers, the action train, swerves to romantic comedy with a thoughtful film called 'April Flowers'. Director/Writer Christopher Tedrick has created a subtle, yet vibrant film, full of allegory and heart. Special thanks to the production staff at 'April Flowers' for allowing me this early review.

Actress Celina Jade, has been featured on my site several times, including this interview http://dansmoviereport.blogspot.com/2014/07/actress-celina-jade-interview-exclusive.html , and is well known in the action world, for Arrow and now with the upcoming new film with Wu Jing. 'April Flowers' will open up a new audience to her work. Celina embodies the heart and soul of the character 'April' her search for love against a backdrop of situations that arise, with each one presenting unique challenges.

Perhaps my favorite scene in the entire film is when April meets an old man on a park bench who asks her to place a stone with a name near a lake. He proclaims that now that he is older he has no relatives or friends alive and puts names of prominent people. The takeaway is that the people are never really gone, as their memories live on inside.

April searches throughout the movie to return a journal that was written, to find the owner. Interpreting the journal as an allegorical object, the unattainable goal. Just because words are written, does not mean that person is your soul mate.

The use of future and past projection in time is prevalent in 'April Flowers'. We see April in a diner imagining what a couple in the 50s would have looked like, in courting rituals, perspicacious, and clever. On a train, we see the older April, in a cool cameo played by Daredevil actress Wai Chin Ho, again, great casting. The use of this type of time connection enhances the film, by broadening the scope.

John Fletcher's Jared character is flawed an quirky, a way that makes it believable. His awkwardness, and yet subtle character portrayal is proof that 'April Flowers' is a well directed film as well as written.

Overall, everyone in 'April Flowers' were obviously in tune with the story, subtle humor, as in Celina Jade saying she hates falling, hah, 'well not in action films'. This is a great indie film and a fine example how a crowd funding film can have an impact. This is a must own when it comes out 8 out of 10.

Check out the official Facebook Page for latest info: https://www.facebook.com/aprilflowersthefilm/?fref=ts
Posted by Dan's Movie Report-Danny Templegod at 1:57:00 AM