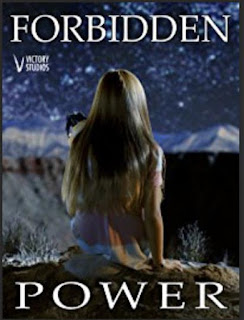 Above photo: Poster from IMDB

Trailer for film Above:

Greetings valued Dan's Movie Report readers, today we have a 2018 film hearkening back to the direct to video films of the 80s and early 90s. Not gonna lie, I used to dig the Andy Sidaris films sexy, violent and fun! If you like his film style you will enjoy Forbidden Power. Again this film is pretty low budget, but hits the right notes of building story, colorful characters and clear filming techniques.

Forbidden Power is basically the story legend of a girl who was orphaned as her father shot his whole family and she is said to have gained mystical powers. All grown up the lady is played with acrimony, zeal and sexually charged tension by Nasanin Nuri who does a great job with the script and vamps it up evil! She is dangerous, fun, alluring and entertaining, an old school throwback to a time when films were guilty pleasures. Watch for her interview soon!

Writer/Director Paul Kyriazi crafts a great story and has a cool climax and ending that may leave a sequel open! No spoilers of what happens, but I really liked the idea of the character interaction in the first act. My only small complaint was some of the acting was not as good as it could have been, a bit stiff, Wearing many hats on the same production can at times a bit bring the quality down, but not always the case. The characters spoke the lines clearly just the conveyed emotion was not always there.

The two leads Lincoln Bevers as George and Nasanin Nuri as Veronica have a push/pull interplay that is quite engaging, They brought their A game, but again was a larger cast for an indie so each person may not have same abilities or experience in acting. This is a bit of an issue but again it is a direct to video film and clean, campy fun, well not always clean! HA!

Overall I enjoyed Forbidden Power, I am on the fence as to ratings, probably a 7 out of 10, a definite rent or, if you like old school 80s horror films a buy. I hope to see more of Nasanin, she really worked hard on this one, she brings the rating up. Order on Amazon now-