Greetings valued Dan's Movie Report readers. Today we have a special interview, Action actor and martial arts expert Ron Smoorenburg stops by to chat Asura! The film is a 100 million dollar Chinese version of a Lord of the Rings type action/fantasy film, and is sure to turn heads all over the action World. Ron discusses his character among other things as the film comes out July 13th in Asia. Get behind the action with Ron! The Questions are below, and the answers are on this video below!

Describe your character in the Film his background etc abilities

How long was pre-production this was a 100 million dollar film was there storyboards etc?

Describe your perspective on working with a mixture of western and Chinese people is there a dynamic that can be challenging?

What did you learn from working on Asura that you think independent film makers and actors can learn from?

Beautiful garden, thanks for the interview. 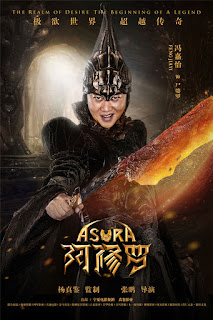 Above: The Golden Goddess, Chinese Poster for Asura!

That is it for now, make sure to watch for more material from Ron as Asura comes out on Dan's Movie Report,the home for exclusives!