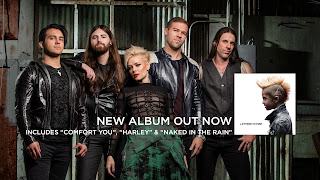 Greetings valued Dan's Movie Report readers, occasionally I swerve into the music genre where I started my writing in the 80s. Today the brand new Letters from the Fire CD dropped from the sky, the internet and physical copy. This is my intrinsic soap box rant. In the 80s we all went to the record store and bought physical copy music. First It was albums, then came CDs, then enhanced CDs with video etc. Itunes and the Amazon streaming market has totally changed the way we buy music. Can just buy one song, not the entire CD, which of course is an excellent thing and great idea. The issue that I have is recent purchase of higher quality speakers and optical cable, even the highest quality AAC audio files no where near match the physical copy. Plus a band like Letters from the Fire put a bunch into the packaging, with a cool gate-fold sleeve, inside pocket with full lyrical booklet, and new photos. Even before you listen to the music inside, of course it is worth the 1 dollar premium over the MP3 downloads. I will say this, if you like Letters from the Fire, or any band who works hard making music and creating buy the physical media!!

Off the Soapbox! The new Letters from the Fire is a 36 minute sonic blast! Diverse songs ranging from the road ready Harley to the anthem like Comfort You, tell a tale of freedom and a new beginning for the band. Replacing a drummer and adding new singer Nina Bergman has given the band a new found life and my prediction is by 2019 will be playing in huge venues!

Very good character people in the band and super talented recording, mixing and mastering on the new CD, make for a polished, yet almost industrial sounding band, they may have changed their style a bit, but the musician ship is top notch and they have a singer who can match the band's intensity.

I have known Nina and interviewed her and of course listened to her older music, she is a pro in what she does and is driven. I feel the band will also have a new found creativity to branch out as well. I spoke with Nina today as the band is in the studio already recording 2 bonus tracks! I am hoping this will be a new either physical copy Japanese or European release as they actually buy physical copies and support music, by buying the band's merchandise! Nina starred in and wrote songs for Assassin X on Sony Home Entertainment, here is our interview. (It was called The Chemist Then) http://dansmoviereport.blogspot.com/2014/09/actress-nina-bergman-interview.html

Now in 2018, Nina also has the Doom Movie she just completed work on and in October Call of Duty: Black Ops 4! What does that mean for Letters for the Fire you say, well Nina is a loyal lady to those who support her! She will be an A list star with the humble attitude! She gets it, rescuing dogs being loving to her fellow humans is her style.

Back to the new Letters from the Fire CD. The songs and three music videos represent a change in style that of course will bring some detractors, that said, my prediction is a whole new genre of fans from the movie and game world will come on in and join the party! Letters from the Fire, has a real winner on their hands with their new CD! Dan's Movie Report rates the new CD a very strong 9 out of 10, a classic and brings this 80s metal head out of the doldrums to love what is going on today, stay strong support music, Like Nina says on her Harley~ Break free! Good stuff! Hot new shout out to the only site on the web covering indie music, Movies TV and internet streaming shows! BOOM!


For all the information blast their official homepage @ http://www.lettersfromthefire.net/
Check out their official Facebook Page @ https://www.facebook.com/LettersFromTheFire/
Twitter: https://twitter.com/LFTFmusic