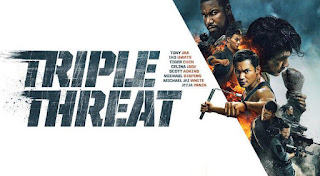 The Triple Threat UK premiere is April 7th at the Fighting Spirit Film Festival (opening night slot) in Birmingham.
UK ~ Universal will release on May 13th.
Australia ~ Icon Film is releasing on May 15th.

Rest of the World ~ Most if not all international dates align with the USA video release on May 14th.
Screening info for USA theaters will be unleashed in early March!

Greetings valued Dan's Movie Report and Action-Flix.com readers. Tuesday March 19th represents perhaps the most important day of the year in action cinema. I call it get to the damn theater day! This is the one day 150 screen nationwide action event! Triple Threat hits the U.S. Box office! Although the film was shot a back in early 2017 and has been a slow burn until now, the time is here to get on the action train.

This is an important step for indie action films, proving that they can do well in the U.S. Box office has been a tough road. Of course they go to DVD and VOD services and do fine, the issue is in order to get the big budgets, people have to go to the actual theater. Company success especially from an indie film company like Well Go entertainment is going to great lengths to promote and do a one day screening event. Yes I know Tuesday is an odd day to premiere a film but remember that is the day films come to DVD so their thinking is people are curious to see a film such as Triple Threat, the way it was meant to be seen. Huge screen, loud and crazy!

Over the next few weeks, and months even on into the Summer Dan's Movie Report and Action-Flix.com will be the place to get exclusive material from the film, contests, interviews, all things Triple Threat!

Triple Threat is perhaps the greatest assembling of real action characters ever. With Tony Jaa, Iko, Tiger Chen, Michael Jai White, Jeeja, Michael Bisping, Ron Smoorenburg. You have actual skilled martial artists not just actors learning a role. Celina Jade is the leading lady and her box office in China is huge, as Wolf Warrior 2 took in 800 million USD there!

The movie sites such as Fandango have set up a page for Triple Threat! https://www.fandango.com/triple-threat-204116/movie-overview 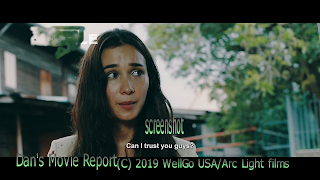 Celina Jade asks you guys to buy tickets! Hah so do it!

Buy tickets, I cannot stress this enough. As a journalist I often have the opportunity to watch a film long before it comes out, that said I like to buy the film if it is good, why it helps the hard working film makers and actors! They worked hard on Triple Threat, this film hopefully will pave the way for even bigger things from Well Go Entertainment and the entire cast and crew.