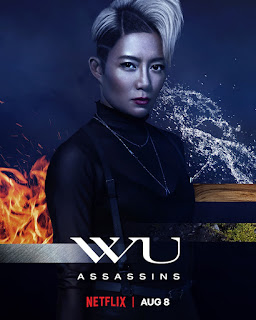 Above:  Official character poster of Zan in Wu Assassins (C) 2019 Netflix. Used for promotional purposes only, as are all of the photos contained in this interview.

Greetings valued Dan's Movie Report and www.action-flix.com readers
On August 8th Netflix unleashed a brand new show called Wu Assassins. In the few weeks the show has been out it has rocketed to the top ten on IMDB, and has a high Rotten Tomatoes score. An instant binge watch for me in one day lead to a detailed review, but I wanted to get a small slice of behind the scenes. I have known and covered JuJu Chan on my site for over five years and I have always found her to be quite interesting to talk with, engaging, forthcoming, and brutally honest. 2019 is a big year for JuJu as three of her projects are released, and her star, as I predicted is rising to the top. Hollow Point is already released in the U.K., Invincible Dragon, released in China July 2nd, comes out on DVD in China August 30th, but since those projects are not completely ready for the U.S. Film market, this is a Wu Assassins specific interview. In addition, JuJu was able to work with one of the most creative directors Roel in two episodes, and I wanted to get her perspective on shooting with him. Sit back, relax, unleash the power of the baddest villain in Wu Assassins, Zan! A spiked heel textual ass kicking will now commence haha!


Chat about your initial meetings with the producers of Wu Assassins, was this a role you auditioned for or was the part written for you.

I went in for two castings for Wu Assassins for the role of Ying Ying. First time was with the casting director. Second was for John Wirth, the show runner. After the second casting I got a call the same week (can't remember if it was the next day or the day after) saying they wanted me for a different role. It was only later that I found out that they created a role for me. 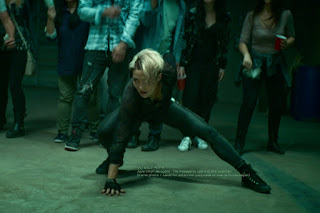 Chat about working with Iko and his team, and also Stunts Canada, what are some of the new elements in your action game you learned for the show, and maybe some tips and tricks in general.

Working with the Uwais Stunt Team was like a dream come true. I would constantly grab any of the stuntmen (who are all masters of Silat) to teach me different things every time I saw any of them sitting around. I think they started dreading me when I turned up in the stunt room! LOL  Needless to say I learned a lot of Silat from them all.

What really surprised me was the very high standard of the Canadian fight team. The entire team was so professional, and yes, I would work with them too as much as possible to learn from them! From them I learn a lot of BJJ and Filipino knife work, which fight choreographer Dan Rizzuto is fantastic at. He's a BJJ black belt and trained years in FMA with some of the top masters. He was also a professional MMA fighter, so he brought a lot to the table.

Incredible, yes Stunts Canada is top notch, working on shows such as Arrow, and The 100! Yes you are active and challenge people to be their best! I must say interviewing you make me a netter writer hah! With regards to the episodes in Wu Assassins, was each episode shot linearly, and what was the time allotment for each episode, approximately. Did you have more time to work out the action sequences? Maybe describe a typical week on set.

It's about 7 working days per episode, give or take. Depending on how much screen time my character was given in each episode would determine my schedule. As you can see from the series, Zan didn't appear much in the early episodes. Over that time I worked a lot with the stunt team, letting Dan gauge how he can shape my character's fight style. It was during that time that we filmed the pre-vis for the kitchen fight (and later the other fights). Because I did my own pre-vis for the series I was totally familiar with the fights when it came to actually shooting them on the day, which was great for production because they could only give us sometimes only a couple of hours to shoot an entire  complex fight scene. Kudos to Megan Hui, who worked so hard with me to pull off some fantastic fights. And it should be noted that Li Jin Li worked very hard too on her fight scenes so we were able to see a lot of her during the fights.

Very cool way of shooting things, JuJu you are an amazing action person! Doing your own pre-vis is the way to do it! Quite interesting on Wu Assassins is the use of several different directors, each bringing their own unique flair on the project, maybe go into some of their styles and how you approached your character each time.


In terms of my approach to my character, it was the same whoever the director was. Some directors would just let me do what I do. Others would add moments for me. I enjoyed working with all of them! 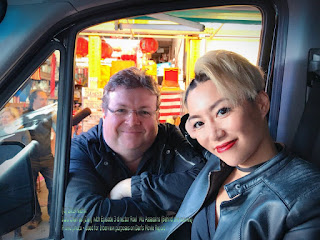 You have a scintillating action sequence in episode 3, I am curious how long that took to film and the experience working with action woman Megan Hui. This gave me joy chat as well working with Roel, I feel he brings a lot to the table with regards to action and camera work.

I mentioned above about the pre-vis, so we went into the kitchen fight pretty much knowing exactly what had to be done. Roel held the camera himself, and him being super familiar with action, allowed everything to move smoothly and efficiently. I think we shot that very complicated fight in 3 or 4 hours, which is crazy quick.

Yes Roel shoots very fast, the entire Hard Target 2 film with Scott Adkins was shot in under 20 days. On your character Zan, what personality traits did you give her, beyond the scripted work, seemed like you made her extra devious.

The scripts are quite detailed on what the characters do and should be conveying to the audience in terms of feelings. Other than that we were given complete freedom to build our character backgrounds. Being brought up in Hong Kong I decided to give Zan a tough street smart persona learn from being brought up in a tough neighborhood in Hong Kong. I've met a lot of people like that when I used to go to these areas to teach piano to underprivileged children. There's a toughness to the people there, men and women alike. But there is also a great value placed on loyalty. I wanted Zan to convey that. 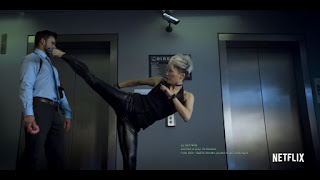 Above: A spiked heel in Episode 8 drives the point home! (C) 2019 Netflix Used for promotional purposes only


You always help others, it is cool you were able to bring that into your character. I figured that regarding the scripts, it shows. That said, Zan is a a bad girl fans can root for! Finally, I must say the ADR in Wu was very clear, were their additional ADR sessions?

Yes. I actually had mine done in Hong Kong while the producers were in LA directing me. Gotta love the internet!

Thanks JuJu for this amazing interview, I look forward to working with you on doing a new one closer to the United States releases of Hollow Point, and Invincible Dragon. Watch for more Wu Assassins exclusives and other cool stuff from JuJu Chan in the coming months. For additional information on JuJu point your browsers to her official social media pages. JuJu is very active, and the entire cast are tweeting and promoting Wu Assassins on a regular basis!