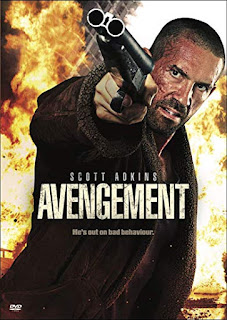 Greetings valued Dan's Movie Report and action-flix.com readers. I know I am a bit late to the party on Avengement, but a Netflix watch yields my thoughts. Jesse V. Johnson directs this character driven revenge film. Scott Adkins plays Cain Burgess, a man unwillingly drawn into a life of crime by his brother and his cohorts.

Adkins serves a stint in a tough prison, and the audience is privy to some of his many altercations and issues that arise. He is repeatedly beaten and tormented, yet seems to retain his cool until the end, when hell breaks loose.

The story unfolds in a series of flashbacks told in a private club with his enemies held locked in. Normally I think that this is an odd way of letting a plot develop, but, here it works with the players in tow. Although we never learn that much about each thug that has done Cain wrong, we learn enough to allow for an entertaining yarn, in between the fights.

Avengement is most effective during the action. Long fights, extended takes, copious blood and bones broken, Avengement takes no prisoners in action, yet I kind of wish there was a bit more dialogue. Decidedly British, the film has a rough feel, yet retains the energy throughout.

Kudos to all of the fight people involved in Avengement, hard work on this film and it shows. Time was taken to show emotion in the faces of the people involved. Make no mistake about it, Avengement is a guys film, in fact all of the people in the film are guys, mostly big rough guys. That said, Kingston Wareing plays the bartender in the private Jockey Club, and she shines as a ray of light in a see of hardened men!

Seriously though the film is pretty good, some of the dialogue is a trifle hard to hear, and the thick English accent warrants a subtitle feed, to understand all of the talking. The accouterments of the film are very well done, camera work, lighting, and music add to the tension and excitement. What I really liked is the pace of the film. There is an urgency to Avengement, gravity of the situation is heavy, and the actors realize it, and even in the retold stories, there is an air of tension.

Having watched a bunch of Adkins films over the past several years, I can say that Avengement is one of his better films, My favorite of the bunch is probably The Debt Collector, that said, the action in Avengement is so good, and worthy of a purchase, or now a definite NETFLIX watch.

Overall, I struggled with a rating, due to the action, I bump it up to a 7.5 out of 10. The story unfolds as the film progresses, would have liked to see a bit more of a back story, yet was satisfied by the amazing action and ending.

Avengement is available all over, and you can now watch it on Netflix. I would say support these hard R rated action films! Much respect to the talented action people involved, sweat was poured in Avengement!