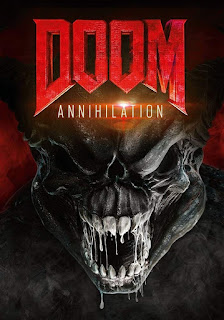 Greetings valued Dan's Movie Report and www.action-flix.com readers Thanks to my friend Nina Bergman, I head about the latest Doom film. I am not going to lie after the Doom film with the Rock, I assumed that was it for the film franchise. Video games by nature especially first person shooter games rarely make good films. The issue is simply there is no underlying story to tell. In the game, you are just dropped into a zone and have to start blasting enemies. A game like Tombraider has more of an advantage as there can be a back story and the quest or adventure is part of the story.

Universal 1440 Entertainment brings Doom: Annihilation to the direct to video market. Actually the story is kind of interesting at least in set up. You have a research colony on the Mars moon of Phobos. Phobos is the larger of the two Martian moons still is under 10 miles in diameter. Essentially it is a colony built around a transport gate that can open up direct transport to various spots in the solar system that have these gates, that said there is only one other gate known and it is on Earth.

The research facility on Phobos was actually built around the gate and for some reason, although it was built 7,000 years ago the gate requires some sort of power source to use. As I stated before, this is a great idea for a start for the film. Of course things go wrong, and the situation turns bad quickly when the creatures start coming through the gate. We are never really told where they are coming from or what caused them to go through the gate in the first place.

Soon after the initial set up the madness begins, a small group of marines are tasked to guard the moon and facility, and they have no clue what they are in for. The power is out in the facility and the back up generators are nearing critical failure level, yet they proceed anyway. I mean what could go wrong going to dark base, with no clue where anyone is, nor how to get around, yes they get lost even. 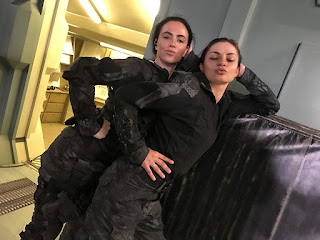 Above: Amy Manson and her sultry double Dessy Slavova on the set of Doom: Annihilation


The cast of Doom: Annihilation save for Louis Mandylor, is largely made up of indie actors, and they do their best with the very basic script. I like the fact that the ladies get involved in the action and are not just the dormant wallflowers as in so many action films. Amy Manson plays Joan Dark. Joan is a bad ass and has many action sequences. Kudos to her action double Dessy Slavova, she got rough and tumble with the guys. Actress Jemma Moore plays Li, and she is rather adorable, yet is pretty tough as well. The true space marine Nina Bergman, brings the big guns and flair to her role, which for sure needed more depth, yet she has some really cool action scenes. 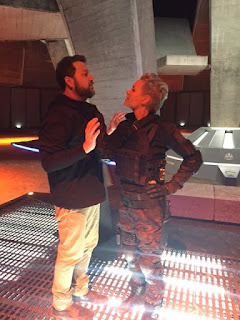 Above: Director Tony Giglio and actress Nina Bergman on the set of Doom: Annihilation


The experienced Louis Mandylor plays a Chaplin who was stranded on Phobos. We learn a bit more about his character, I kind of wish all of the characters were explored more, even though we see a young Joan Dark with her mom, we never really learn about the characters, thus when they expire, little emotional connection is formed. Hey this is Doom, is there supposed to be this type of connection? Ha, well would have been nice.

This is a very violent film, full of action and bloodshed and many body parts. Due to the subject matter this is for sure an adult film, yet many kids who play Doom might find it a bit entertaining. My main issue is the transition from game to movie. I mean if you are not playing one of the characters will the audience be engaged for the 90 minutes? I think there is enough action, and thus Doom: Annihilation never gets bogged down or has slow parts. There is always peril and the characters show a sense of urgency.

The sets, lighting, and camera work is pretty good for the limited budget. Usually films from Universal 1440 fall in the 3 to 7 million dollar budget some less some more, yet for this budget, Doom: Annihilation is pretty good. I mean, there are big guns, explosions, crazy aliens, somewhat decent CGI, and sets that perhaps would even be found on bigger budget films. The acting is decent, nothing earth shatteringly awesome, yet, I feel that the actors had direction on what to do, and no one was unfocused on the plot or their portion of the story. Doom: Annihilation rates a decent 6.5 out of 10. I admit I thought some of the acting would be lacking, yet it was not, and neither was the quality of the production.

Order from Amazon above

Connect with the film on social media:

Please check out my recent interview with Actress Nina Bergman where she chats about her work on Doom: Annihilation: http://dansmoviereport.blogspot.com/2019/08/actresssinger-nina-bergman-exclusive.html

I spoke with Nina and am planning on doing an autographed photo contest later in 2019 with her. Keep reading Dan's Movie Report and www.action-flix.com you home for action on the web!
Posted by Dan's Movie Report-Danny Templegod at 8:05:00 PM