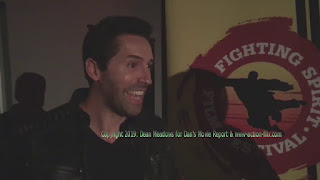 Greetings valued Dan's Movie Report and www.action-flix.com readers. Back in May my good friends Tayah and Dean were able to attend the Fighting Spirit Film Festival in Birmingham and witness the U.K. Theatrical debut of Triple Threat, and to interview the amazing Scott Adkins! Though I posted the video awhile ago, many viewers were not able to see it, thus I have decided to type it out and pay respects to the entire Fighting Spirit Film Festival Staff, and of course the gracious Mr. Adkins. I was not able to attend, nor send a rep for the most recent one, yet I stand in support of this great event. On to Tayah and the one and only Scott Adkins! 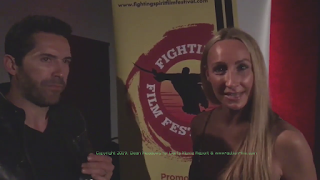 DMR: Tayah- Hi I am here with the one and only Scott Adkins on behalf of Dan's Movie Report. I have a few questions for you, can you chat a little bit about working with and having a fight scene with Tony Jaa, in Triple Threat? What are some of the things you did to amplify the action.

Scott Adkins: I did as I was told, because we had Tim Man as our Fight Coordinator. He is brilliant, obviously, I have done a lot of stuff with him. He had a really difficult job as he was creating fights for the best martial arts actors in the world. I think there was a lot of pressure on him and he did not have a lot of time to do it but he did a brilliant Job as he always does. I had always wanted to work with Tony Jaa, it was an absolute pleasure, he is such a humble guy, obviously he is an incredible martial artist, I literally have never been kicked as hard by anyone in my life. I know he was not trying to be he has so much power. He is a great guy, mutual respect. I cannot wait to work with him again and I believe we will. 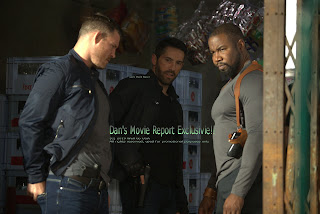 
DMR: You and Jesse V. Johnson have worked together on more than half a dozen films, can you talk about the chemistry you have together, and why the two of you work so well together?

Scott Adkins: I am just doing more character stuff with Jesse. I am really enjoying doing the more character based action stuff with Jesse as I get a bit older. I am really interested in creating characters and Jesse gives me the space to do that. It is a great working relationship, we know each other's strengths, each other weaknesses. We can be hard on each other, we even have arguments on the set, to be honest, but it is always from a passionate place, where we are trying to do the best work that we can do. It can get pretty heated sometimes, haha, but by the time the film comes out we are both super happy with the direction we are both going. 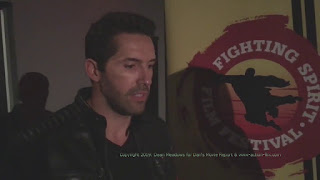 DMR: I know we are running out of time, will we see Boyka again?

Scott Adkins: I don't think we will. I think Boyka is done. I think he ended in a nice way, he ended in prison, rotting. Haha, yes that is the trajectory of Boyka he is like a tragic hero in a way. 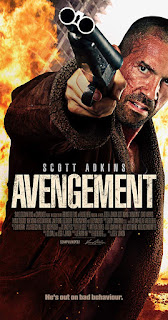 Above: Poster for the film Avengement used for promotional purposes only


DMR: Thanks for that insight to Boyka, what have you got coming up, that you can discuss?

Scott Adkins: Yes I have Hitman 4 coming up. It was great to work with Donnie Yen as he was a childhood hero of mine. He specifically asked for me in that film, so that was great. (Avengement is coming out, character driven action film, again working with director Jesse V. Johnson, very British very gritty, excited about that one. 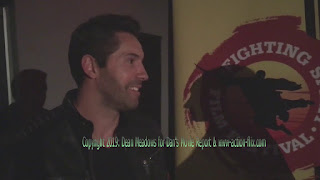 DMR: OK Great, thanks Scott for taking time out of the Fighting Spirit Festival Birmingham to conduct this interview, we will look forward to watching the new films.

Scott Adkins: Thanks, thank you.

For more information on Scott Adkins please connect with him on his official social media pages:

For more information on the amazing Fighting Spirit Film Festival please point your browsers to:

Special thanks to Soo Cole and the entire Fighting Spirit Film Festival staff for their assistance in this interview. Please check out my associate, and interviewer Tayah Kansik. Tayah is an excellent martial artist, actress, and personal protection specialist: http://dansmoviereport.blogspot.com/2019/01/tayah-kansik-acting-action-spotlight-c.html

All photography and videos are courtesy of Dean Meadows, Dean owned and operated Vengeance Magazine in from 2003 to 2006 and now is completing his first feature film Scarlett Cross: https://www.facebook.com/deanmeadowsfilm/