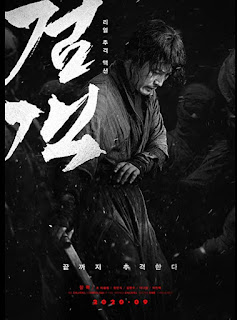 Greetings valued Dan's Movie Report and Action-Flix.com readers. Another rapid fire, spoiler free review! The good folks at  Trinity CineAsia have a treat releasing for action fans and on DVD May 17th, and Blu-ray May 24th! 'The Swordsman' delivers on the promise of action somewhat a straightforward story, yet surprisingly full of swerves and curves.

Actor Jang Hyuk plays a sword-fighter named Tae-yul who is going blind and is searching for his daughter. There are other swordsmen in the film of course, yet his story and fighting style, almost like a inhibited drunken yet controlled aggression makes for an entertaining watch. There is a particular scene in which there are so many fighters stacked against him, it is almost to 'Kill Bill' insanity.

Director Jae-Hoon Choi manages to keep the actors completely focused on camera. His handling of the emotional level of the characters keeps the audience engaged. It seems like he did longer takes for the action, thus not taking the two moves then stop and start again approach. I hope to see more of his work in the future.

All of the fighting in 'The Swordsman' is consistently crisp and tight. The camera work shows the action, and much of it is in the clear daylight. Seemingly in so many sword action dramas either the subjects are filmed at odd angles or too far away, or they are so poorly lit, it is hard to make out the sequences. This film also gets the distances from the camera to the fighters corrrect not so close we only see an eye or a tip of a blade, and not so far as to only see blurry shadows off in the distance.

'The Swordsman' manages to avoid the bogging down of unneeded dialogue, in fact compared to the action there is not that much. This Korean film knows what the audience wants and delivers them in a sharp metal poking package! Musically the film flows along, and sounds great in headphones, even the clanking of the swords was realistic. As I stated before the cinematography is clear and easy to view. The costuming seemed a little bit plain, again though this is not a huge budget film, so excusable.

Overall, 'The Swordsman' is an action lover's heaven, epic battle sequences, big scope considering the budget and absolutely worthy of a rent or purchase! The film rates a 7 out of 10.