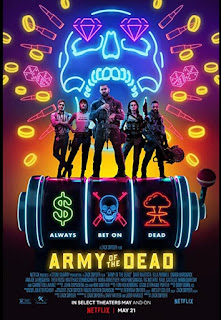 Above: Army of the Dead Poster from IMDB (C) 2021 Netflix, all rights reserved, image used for review purposes only and not monetized.


Greetings valued Dan's Movie Report and Action-Flix.com readers. Time now for a brand new rapid fire review! Netflix, have to live their style and panache! The good folks at Netflix decided to give Zack Snyder and his team somewhere in the 80 million dollar range to unleash the “Snyder Cut” Zombie film! Seriously, at 150 minutes 'Army of the Dead' is perhaps too long for it's own good, but provides the viewer with a violent ballet of zombie killing and zombie munching madness.

Make no mistake about it, 'Army of the Dead' is an R rated opus, epic in scope, and probably shortened by 30 minutes could have had am even successful theater run, if not for Covid. Synder ramps up the human element by involving Dave Bautista's character Scott Ward and his on screen daughter into the fray. Oddly enough time is taken to have detailed dialogue in the midst of zombies, I mean do the undead stop for human interpersonal relationship?

My snide remarks aside, Bautisita shines as the lead, once again cementing his big budget action prowess. Actually actress Ella Purnell does a solid job playing his daughter and is given a sizable on screen presence. This brings me to a real positive point of 'Army of the Dead', strong female characters! Whoohoo! Actress Tig Notaro plays a bad ass helicopter pilot, who is sarcastic and fun. Actress Nora Arnezeder plays Lilly the Coyote, her job is to shuttle the team inside the closed city of Las Vegas. Indian actress Huma Qureshi plays Geeta, adding an international flair with style and intellect. Like I said, the ladies play a big role! 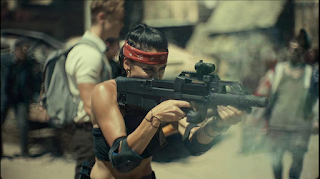 Above: Samatha Win gets ready for a zombie massacre! (C) 2021 Netflix, all rights reserved, image used for review purposes only, not monetized.

Now focusing on my favorite character and aspect of 'Army of the Dead' Actress Samantha Win , absolutely kills it as Chambers, a hard talking, action filled Jenette Goldstein model soldier, who gets rough and kills and moves with style. Win actually brings my score up a point as her portrayal of the character. Obviously modeled after Goldstein's Private Vasquez, complete with headband! I am sure we will see more of Samantha Win in the very near future.

Against the backdrop of the zombies is a plot to steal 200million dollars from a vault in a casino, inside the container walled city of Las Vegas. Many sub plots are around, and actually seem to get lost in the shuffle like Bautista's daughter searching for the mother of one of the children she watches in the camp she works in. just a bit unnecessary. Balancing out is a violent, lustful zombie queen!

Action, stunts, lighting, and set up are great, though and the movie really hits stride during the frantic action. Overall I liked it and rate 'Army of the Dead' a 7 out of 10, and Samantha Win, a bad ass 10! Unleash your zombie killing self and go to www.netflix.com for further information.