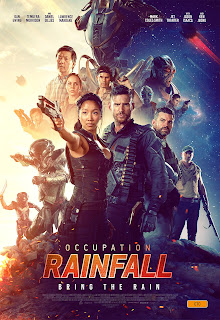 Above: Poster for 'Occupation: Rainfall' (C) 2020/2021 Monster Films and Saban Films, All rights reserved image used for promotional purposes only not monetized.

Greetings valued Dan's Movie Report and Action-Flix.com readers, across my desk today comes the second installment of the Occupation film series titled 'Occupation: Rainfall. The film is released in the USA on Saban Films. When director Luke Sparke had a vision for the original film he probably never could have imagined how a indie film from Australia could have such a global impact. The first film is a masterful story of everyday people fighting for their lives in the midst of initial aliens invading Earth. The first film had detailed character development and an every-man relatable quality. The second film assumes that the viewer has seen the first one, thus the action and starts out basically in the middle of a full blown war.

'Occupation: Rainfall' has a budget probably three times as high as the first one, and the money was used for obviously larger sets, more detailed VFX and superior cinematography. 'Rainfall' does not have the charm and innocence of the first film, but this film is told from a soldier sense, rather than a bunch of locals rounded up to combat the aliens. Because of this I recommend watching the first film prior to viewing the sequel.

Dan Ewing reprises his role as Matt Simmons and Temuera Morrison also returns to the leadership role of Peter Bartlett. The lead female role of Amelia Chambers played by Stephany Jacobsen in the first film has been replaced by the amazing Jet Tranter . Normally I do not like replacing characters in a direct sequel, but in 'Occupation: Rainfall' the alteration of character from civilian to hardened soldier implies almost a totally new character. Yes in 'Terminator 2' Linda Hamilton bulked up to warrior size, but there was six years between films. Since Jet already had her acting and physical action skills on point she was an easy choice and the proper one. That said, Jacobson was a great choice for the first film.

'Occupation: Rainfall' is loud, booming, full of explosions and firefights. Director Luke Sparke made a film for theaters, I watched this at home, and in this case I wish I was watching this in a huge IMAX screen. The movie progresses at a frantic pace, not even allowing for much time to catch your breath, save for a few scenes of tender moments with Amelia, and some explaining of the weaponry and tactics. Normally I would like more time spent on character development, but here it is on the fly, and works within the rapind pace structure of the story.

There is an alien named Garry, who is sympathetic to the humans. He is hunted by his own kind and the humans, yet the small group shelter him and he helps them. This fact adds a conundrum to the group, some of who do not trust him. The aliens are referred to as The Greys, Garry the alien has a scene in which the humans attack the home where he is housed along with the soldiers. I see correlation here as to how the aboriginal people in Australia are often treated, as outcasts, even though they deserve a voice and to stand on equal footing.

The musical score gives Occupation: Rainfall a bigger feel, and demonstrates the emotional connection with the characters. The importance of a solid musical bed really amplifies the intensity and urgency in films and kudos must go to Frederik Wiedmann and the entire team of sound recorders as well. Occupation: Rainfall not only sounded epic, but even the background sound in headphones were quite stunning.

Project Rainfall is mentioned and I will not spoil it, as the reveal is in the final 30 minutes of the film. Let us just say it involves an alien weapon, yet the humans have a their own reverse engineered weapon as well. Actor Ken Jeong portrays Bud Miller and he chats about Project Rainfall and adds an bit of levity to the otherwise very serious film.

The ending is pretty crazy, and the sheer number of explosions and action rival a Michael Bay 200 million dollar film, let us just say a third film will happen. Overall I liked 'Occupation: Rainfall' Kind of like the massive budget Chinese film 'Red Cliff', the film essentially is a two parter. I am curious how the battle will unfold in the second part of the film. Respect to all involved, a labor of passion, sweat and determination. 'Occupation: Rainfall' rates a 7 out of 10, if you can view in a theater I recommend it, otherwise a worthy of a rent or purchase if you like SciFi.

Please check my interviews for Stephany Jacobson as the original Amelia and director Luke Sparke, watch for a third Jet Tranter interview later in 2021:

For further information go to the Saban Films Official Website:

The film is available on Itunes and various digital platforms.