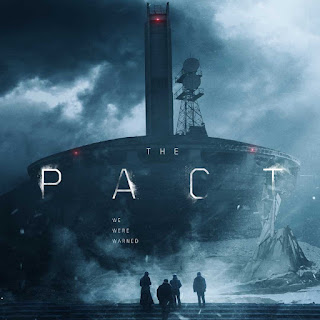 
Greetings valued Dan's Movie Report readers. Thanks to Actresses Natassia Malthe and Ada Dumitru, I was made aware of a science fiction/mystery six part series called 'The Pact' The series was shot all the way back in late 2018 and early 2019. Obviously with the onset of the pandemic, 'The Pact' kind of lay dormant a bit. Initially I would have hoped it landed on Netflix or Sci-Fi Channel, yet after watching it, The Roku channel provides a perfect home, as they own the streaming rights to the U.S. U.K. And Canada. This gives exclusivity and enough time to build an audience as the early territories just released on March 26th, and the rest of the world will roll out in July. What is interesting is unlike Netflix, this particular series is available to all of the residents of the three countries free of charge, not behind a pay wall, and on the internet with a laptop you do not even have to register for an account. Kind of like the Tubi TV content, except with essentially no commercials, perhaps a break here or there. Important t to not, although The Roku Channel has over 50 million viewers, it may be hard to track as you do not have to register to watch much of the content.

On to the review of 'The Pact'... The show spins a yarn about a mysterious fog that causes people to go insane. Miasma is the affliction and it behaves in the way a mind altering hallucinogenic drug. In one harrowing scene a man and a woman meet and the man holds her hand while she is holding the gun and begs her to kill him. It seems to affect people slightly differently, no spoilers. HAHA!

At a total runtime of around 240 minutes, it is about as long as two feature length films, yet seems to be stretched out. Obviously the story creators Bobby Barbacioru and Gareth Brookes have a gift to weave an intricate tale of forlorn and sadness, yet the pace is more 'Walking Dead' than breakneck speed. Essentially 'The Pact' is like an extended Road film, without the car chases! I would say 'The Pact' is more visceral than action oriented although later on in the series, there is some pretty cool action – (no spoilers) The two creators are in the process of finishing up a new series 'Three knee Deep' which also stars Louis Mandylor and Ada Dumitru.

Above Image: Natassia Malthe as Freya in 'The Pact' (C) 2022 Katara Studios

Speaking of acting, I thought the cast was well directed, and no performance seemed over the top or wooden. Highlights include Natassia Malthie's 'Freya' empathetic, and emotional particular harrowing scene in a forest (no spoilers!) Ada Dumitu's 'Gash' has some crazy blue war paint ala Olga Kurylenko in 'Centurion', and she seems quite violent and rather salacious, ha again no spoilers! Louis Mandylor is his usual consummate professional self delivering an undulating intensity.

As far as the scenery, camera and sound work. Much of the series is shot outside so it has a bigger feel than perhaps the budget was. The lighting, camera work were solid. The series seemed to sound better in headphones, especially to pick up the nuanced sounds going on around the characters. Musical scoring was eerie and appropriate for the source material.

Minor gripes about the length, actually I think this series might have worked as a stand alone movie, yet, I totally understand what the creators were going for. The reason why I state this is there are areas of production that seem like they are slightly elongated to allow for an entire 6 episode series. 'Peaky Blinders' did 6 episode series, but with the gangster plot something was always happening, Again I actually enjoy this relaxed pace, but I fully understand that it may not be everyone's cup of tea. Secondly, minor spoiler well not really as it is on IMDB, Dumitru's 'Gash' character is basically in only one episode, and I feel she adds a powerful spark, well in the next series with the same creators 'Three Knee Deep' she is one of the main character, a serial killer! 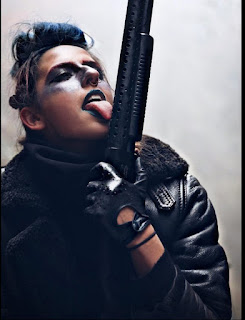 Above: Ada Dumitru strikes a salacious pose on set of 'The Pact'
Photo by Dragos Barbacioru

Overall, you can never go wrong with testing the waters on a free series, I recommend watching it in one or two nights to get the full effect, minor grips aside 'The Pact (2022)' rates a solid 7.5 out of 10, kind of has that weird cool vibe, note to parents with kids under 12, there is a large amount of swearing and adult themed violence and behavior.

If the direct link is not working, please open the main Roku Channel website or download the Android or IOS app.

Watch for further coverage of the show including interviews with Natassia Malthe and Ada Dumitru, on your home for exclusive content, Dan's Movie Report