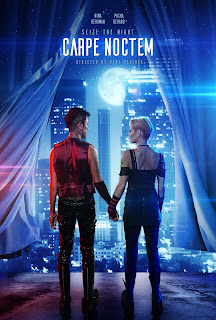 Above: Poster for the film from the official Facebook Page. All rights reserved, used for promotional use only, not monetized.

Greetings valued Dan's Movie Report readers. All the way back in 2018 and 2019, Actress/Singer Nina Bergman was telling me about this cool new film called Carpe Noctem.  The the film is out now! and the film is now on Amazon and Itunes, for about 4 dollars to rent and 10 dollars to buy, at least on Amazon.

Before I review 'Seize the Night', I will say I cannot stand when reviewers spoil, or reveal major plot points of a film. This one is especially important not to reveal. Plot from IMDB: Over the course of one night, a whirlwind romance between a drug dealer and a mysterious singer takes them on a collision course with a dangerous mind-control ..

This film is a drama, through and through, no explosions, car chases or big shootouts. Trust me this is a great thing. Writers Pasha Gerard and Jhan Harp create a verbose yet ultimately epic tale of lies, deceit, fueled by the pursuit of a drag called a Suggestive. Lead stars Pasha as GB and Nina Bergman as GG deliver rousing performances of their troubled, characters, addiction and other nasty things come up, no spoilers! Nina Bergman, a Vegan, and non-drinker, drug user, or smoker, really acted her ass off. That said she has seen first hand what issues can arise on her tours with Letter From The Fire. I actually draw a parallel to her own character in this film as a singer of a fictional band named Sin5 and her real life touring experience. With the tragic recently death of Taylor Hawkins, once again a drug mystery surrounds a musician's death. Nina crushes the role, and probably has the most dialogue of any film in her career, and excels at it. Pasha also really amps up the emotions without overacting a delicate balance, well done!

'Seize the Night' has a slow burn build, yet, never feels boring as there are always clever characters in the film to liven things up. Jonathan Erickson Eisley as ruthless shady business man, John always looking for an angle to take advantage of his clients, adds an air of villain, yet oddly sympathetic. Matt Miller as Agent

is completely out of his mind, once again no spoilers. Alain Rono as Furry, again no spoilers, but what a weird scene! Trust me, it is the path taken that makes 'Seize the Night' clever and dynamic.Nothing is what it seems and characters can appear when the audience is least expecting them, once again, no spoilers!

Composer Karel Havlicek sets the mood and tone. The music rises and falls based on the seriousness and complexity of the scene. Watch for Nina Bergman to sing a few songs on the movie as well! The music never interfered with the copious dialogue, but when it was needed it hit like a arrow at a target in a bale of hay.

Special kudos go to Cinematographer Daniel Button he has do deal with a huge variety of challenging situations with regards to various settings and lighting. The camera seemed to be a extension of the characters especially during some drug fueled incidents, again no spoilers.

With a runtime of 86 minutes, Seize the Night never waivers, no wasted scenes, I kind of wanted more, yet upon a second watch realize that this amount of dialogue, usually would fill a movie of over 100 minutes, and was not needed to be extended.

Overall, 'Seize the Night' is rather incredible given the budget, I would really like to see this film make some sort of indie festival run with the stars on hand taking about it. What else is there to say, buy it! Seize the Night rates a rousing, sharp, yet tender masterpiece a 9 out of 10!!

Kindly check out my most recent interview of Nina Bergman: http://dansmoviereport.blogspot.com/2019/08/actresssinger-nina-bergman-exclusive.html

Watch for more exclusives from this fantastic film coming later in 2022!