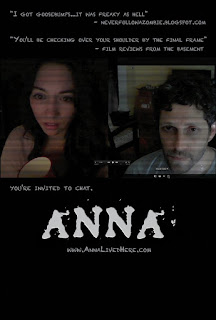 Anna is a short and clever blast of terror that tells the story of David and Laura Cole, a London couple relocating to L.A., and is filmed in a Skype real time video chat style. David is in L.A. a week early getting the new place ready while Laura remains in the U.K. cleaning up loose ends.

The style of Anna is like a Paranormal Activity realism, but the twist of the live video chat is different. I am not sure this video chat idea would translate to feature film, but as a short film it is very entertaining.

Lisa-Marie Long from The Hike plays Laura, with a bit of a subdued playful tone at first, but it works for this film as she does not know about the haunting that is happening in L.A. in their new place. Lisa is an attractive girl next door type who comes across as a regular person, not trying to over act or over react to the situation. Repeat viewings bring out the nuances she brings to the character. 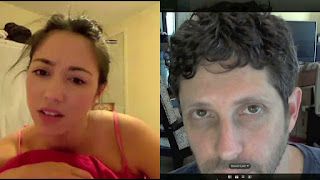 (Above Pic: Lisa-Marie Long as Laura, is a long way from The Hike in Anna, and even further away from her hubby to protect him! Haha!)

We see the couple chat over the course of the week, but things become increasingly strange. I am not going to spoil it, but this film has a solid ending payoff.

The direction from Matthew Solomon, who also plays the lead David, is natural. His character is just a guy in a new place, unfamiliar with his surroundings. He has short conversation with a Realtor named Annette about the place, but video chats with his wife are the main focus.

I watched Anna four times before reviewing it and each time I slightly changed my rating. I can say this is worth checking out for it's singular focus. I do wish that the video would have shown more of them just calmly working around each house separately before the big conclusion. All of that said, I rate this flick a 6.5 out of 10. I rate Lisa-Marie Long as adorable and intelligent. I rate Matthew Solomon as a gentleman with much potential and full of ideas. I now rate this review as over!

For more info on this great film stalk your browsers over to: http://annalivedhere.weebly.com/index.html
Posted by Dan's Movie Report-Danny Templegod at 10:35:00 AM