The Prince & Me: The Elephant Adventure Movie Review 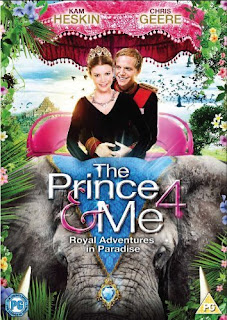 Above Pic: Poster of film on IMDB


The 2012 year of action on Dan's Movie report takes a swerve to the far East for a bit of lighthearted family oriented, romance mixed with action in The Prince & Me: The Elephant Adventure. This is the fourth installment of the series and no I HAVE NOT seen the other films. Actually The two main reasons I am reviewing this film are that even though the film is two years old, there are no critic reviews on IMDB, and because of the tremendous amount of searches on my site for all things Selina Lo related, I know my readers have extremely excellent intellect and astute vision. haha!

The story opens with the King and Queen of Denmark (Chris Geere) and (Kam Heskin) going to Thailand (a fictional kingdom) To meet with there King and be a part of the Royal Wedding. Things get complicated when the rich factory owner's arranged marriage to the King's Daughter (Ase Wang) is thwarted by the fact that the she is actually in love with a stable boy, who incidentally trains and watches the Royal Elephant.

There is an altercation between the bride to be and her smarmy rich factory owner and the the Royal Elephant runs off. Up until this point the movie was pretty slow moving, but once the adventure to find the elephant begins, the movie is fairly full of family friendly adventure. 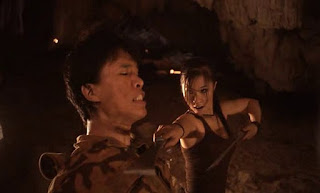 Above Pic: No random thug shall go unpunished! Selina Lo as Rayen!


The king vows to halt the wedding for two days until the elephant is returned to the Kingdom. The King and Queen of Denmark travel through the jungle with their assistant, guide, and protector Rayen (Selina Lo). Selina takes this film by the horns and runs, picking up the pace, even the other actors seem to step up their game when she is around. Selina has her opportunity to fight off a few bad guys and I have decided, if I need a bodyguard for a dangerous location I am contacting her haha!

The action moves through various settings, all scenic and tropical. In fact that is one of the highlights of the film is the scenery, settings, and elaborate costumes of the various royal folk. The film does have drawbacks, however, as the pacing is odd, sometimes full of action, other times, especially the beginning part are rather slow moving and tedious.

The acting is average, save for Selina, she put way more effort into her character than the others, but when she was onscreen with the other actors and actresses, it seemed like they were a bit more lively and into their character.

The film is directed by Cathrine Cyran, who has written a bunch of R rated action films in the past such as Blood Fist II and Future Kick. I thought she did a decent job merging the action and the slow parts, but the story needed a bit of tightening up even though the film has only an 90 minute run time.

Overall I liked The Prince & Me: The Elephant Adventure. I believe it sends a positive message to kids, and has no real objectionable material even though it is PG rated. I rate the film a 6 out of 10 worth a rent, definitely a buy if you are a Selina fan. Amazon actually has the film for only 5 dollars now, follow the link below.