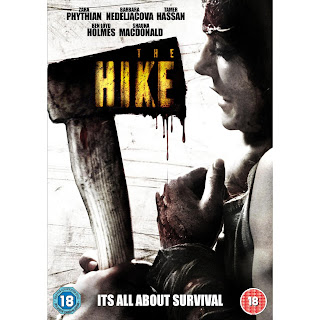 After months of anticipation I finally get to take a Hike, and it is a bloody, brutal, creep inducing, nasty one! Writers Ben Loyd-Holmes and Rupert Bryan have come up with a sordid tale of deceit in the woods where things are not ever what they seem.

After a crazy pre-title opening sequence, which we witness murders, but have no clue as to what happened, we then meet our lovely cast of ladies prior to them taking The Hike. The ladies are all cute, like in the Descent, but that is where the similarities end. This film blazes it's own trail, unique and maniacal.

Barbara Nedeljakova (Hostel 2) as Torri, Stephanie Siadatan as
Leanne, Lisa-Marie Long as Ellie, Jemma Bolt as Charlie, and Zara Phythian as Kate are the unsuspecting hikers. The girls chat a bit while in the car driving to the area to begin The Hike. Usually I hate small talk in movies, but I liked it in this film especially with a cast of five characters like this, made me actually care about their fate. All of the ladies do a pretty good job with their characters. The acting is light-hearted and enjoyable in the beginning and turns to terror as the film progresses.

Zara Phythian stands out playing Kate, a soldier returning from Afghanistan. She takes the lead of the group and plots the course for The Hike. Zara has a commanding screen presence, deep expressive eyes, a clear speaking voice, and has natural body movement in front of the camera. Kate's survival skills are put to the test early in the Hike when the group meets up with a seemingly nice bunch of guys lead by Ben loyd-Holmes as Ethan.

Ethan is also a particularly well planned character, complex and subversive. Ben Loyd-Holmes does a solid acting job. His character changes as the story progresses, keep watching till the end, you will learn to fear him. Ben has to go through a wide variety of emotions and pulls them all effortlessly. His antagonistic character build is forceful and brings new meaning to the words "watch out what you wish for", you might get it!

I could go on and on waxing poetic about how twisted this film is, there is a disturbing rape scene, there is I repeat is, nudity and not the type I expected, now that was rude! Nothing is what it seems with The Hike, but that is the beauty of it! This film keeps the viewer guessing as to what will happen next.

The Red camera was used in the woods, and throughout the production, and looks like 35mm film, especially at night. All of the scenery is lush and beautiful, save for the random killings and strung up animals hahahaha! This is one film that obviously took a lot of time to film, and set up shot selection. This is a high quality low budget production all the way around. Almost made me want to take a Hike, won't do it though unless I have Zara's character Kate to show me the Way!

The last half of the film is a foot-chase for survival with pounding suspenseful music and some epic false conclusive moments.

Stop reading this review and run, I say run, out and buy the Hike NOW! I rate this psychotic fight for life a 8 out of 10 axes on my survival scale!

The Hike is available on Amazon UK for under 10 US Dollars! and all over the UK! Look for US Release Shortly.

Learn more about actress Zara Phythian from her exclusive interview on Dan's Movie Report @ http://dansmoviereport.blogspot.com/2011/10/zara-phythian-exclusive-interview-c.html
Posted by Dan's Movie Report-Danny Templegod at 12:47:00 AM