Someone Else Movie Review 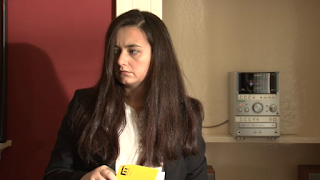 Above Pic:  Actress Karen Bartke sees visions of horror in Someone Else.

Always loving the short films, I checked out the 2010 Scotland produced horror flick Someone Else. Director/Writer Andrew Newall brings the paranoia in this four minute slice of ethereal mind-bending madness. The film is so short that there is barely enough time for set up and plot points, however the creepy elements and pensive moods brought by actress Karen Bartke are enough to set the tone and convey the story.

Someone Else opens with Karen having visions of another creepy woman in the room with her as she sleeps, she discusses them with her psychiatrist, and eventually the nightmares worsen then turn into a possible reality.

The camera work and direction are professional, and I see tinges of influences from a Dario Argento type horror film, the action is left up to the viewer's imagination, I like it, and rate it a 6 out of 10. Looking forward to more.