The One Warrior Movie Review 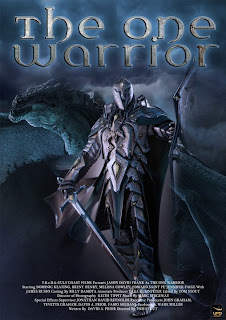 Above Pic: The One Warrior Movie Poster

Sometimes I am just in the mood to watch a sword and sandals flick. The One Warrior follows the path of a mythological warrior on a somewhat noble quest to defeat the Evil Lord Shoukata, the one who destroyed villages, leaving death and chaos in his path.

With such a set up I kind of figured that this would be a quest type action movie filled with peril, sexy ladies, and excitement. The One Warrior probably will work well as a video game, as that is what it is supposedly loosely based on, as a movie the pacing and story make it a bit bland.There was a bit of peril, but the action and excitement was rather lacking. I did read on the internet that for his next film the director said he wants to concentrate more on story, and acting, which is a good thing as even an experienced actor like James Russo, muddles through a mundane storyline easily imagined by a 10 year old.

The One Warrior goes on his quest, which oddly follow the challenges of Hercules, as he has to defeat a giant, amongst other oddities including a group of Amazons, which is actually on one woman, filmed at many different angles. Incidentally the casting director must have had very slim pickings for women to be in this film, not to sound sexist, but a jaunt to a local grocery story on a hot day should yield far better results.

The filming techniques are decent, and actually a bright spot in the production. The swamp and forest are lush and all of the action is clear and easy to spot. The action itself is another matter entirely. I just did not care for it. The fight scenes, and there were at least a half a dozen of them, had the same pace as a turtle and a snail locked in a mortal battle inside of a vat of molasses. The choreography was not that bad, however it was like the actors had lead in their bones while filming them haha.

Even though The One Warrior was not great, I have seen films with a far worse concept and storyline. I imagine the same film with a tighter story, bigger budget, and much better actors would be entertaining. Sadly I have to give this one a 4 out of 10, a one time watcher.
Posted by Dan's Movie Report-Danny Templegod at 8:09:00 PM