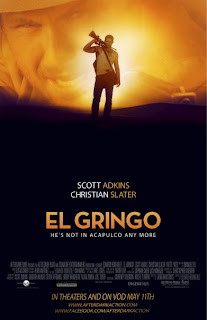 Scott Adkins as "El Gringo" (The Man) delivers the goods in this sordid yet often sarcastic tale of a man going "South of the boarder" with 2 million in cash. El Gringo is essentially a "road movie" and has a bit of the look and feel of Robert Rodriguez's "El Mariachi".

El Gringo opens with Adkins taking the money, and disposing of a portly, bloody gentleman in an explosive manner. El Gringo makes his way to El Fronteras, Mexico and while searching for the elusive water to drink encounters Flaca (Sophia Sinsniega). She does not want to make friends, she wants his satchel, and brandishes a knife! Adkins quickly disarms her and shows her how to hold the knife, and proceeds to ask for her long sleeve shirt, as he is wearing only a tank top, how her shirt fits him is beyond me, but crap that was funny. Not to sound sexist here but Sinsniega looks far better in a tank top then long sleeve shirt, Adkins did the right thing haha!

El Gringo finally buys a drink of water at a seedy bar run by Anna (Yvette Yates). She turns down his initial offer of one-Hundred dollars by crumpling it up and putting it down on the bar. After much discussion, the price of five-hundred dollars is agreed upon. What does El Gringo get for the five bills, a tiny, dirty shot glass, half filled with yellow Mexican tap water!! HAHA Anna reminds him of Montezuma's Revenge.

Hot on his trail is Christian Slater as Lieutenant West, reminding me more of Nicholson every year. Slater is sarcastic, sardonic, and ready to shoot off his mouth or his gun at the drop of a hat.  There is a twist about 2/3 in so no more spoiling.

El Gringo is a good film, the main problem is the pacing and editing. The movie runs at 102 minutes when it clock in at 85-90 minutes. There are several action scenes and when they happen they are solid, well filmed and acted, but the down time between the action gets a bit ponderous.

The look of the film is mostly sepia tones, interspersed with the colors. The lighting and camera angles enhance the mood, and do help transition the film through the slower parts.

Overall I give El Gringo a 7 out of 10, This is a good vehicle for Scott Adkins to sink his teeth into, in fact all of characters in the film are given depth. It is available now on Amazon video on demand. Check out the link below to watch film.