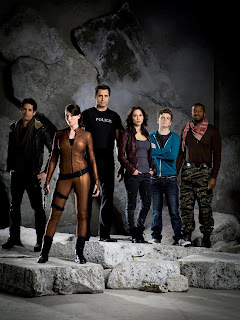 Above Pic: Cast Photo on Continuum from Facebook Page.


Continuum tells the story of detective Kiera Cameron (Rachel Nichols) who is transported in the past to 2012 chasing a ruthless gang of criminals who will eventually form a terror organization in her own time of 2077. Continuum is an amalgamation of parts of Judge Dredd, Timecop, and a bit of the look of Blade Runner. In fact elements are thrown in from several other movies and TV shows, but there is so much originality and action in continuum, the ideas bleed out fresh and smooth. Also since the technology is only one way, Kiera is also looking for a way back to her own time to be with her loving child and successful husband.

Sexy, talented, and upbeat, Rachel Nichols is the star and she has a commanding screen presence in continuum, not afraid to show her vulnerable side, yet when need to mix it up she can pulse blast a felon or inject him. Kiera encounters a thug on a subway train and makes the arrest, but rather than taking him to jail, he is injected with a poison that forces him to turn himself into the pokey!

Interestingly enough, the technology Kiera is using: clothes that can change form, even becoming fashionably forward and bullet resistant, in brain cortex display and advance auto-location facial recognition equipment, will probably be available in the next 50-60 years. The series creators try their best to keep the hi-tech stuff futuristic yet having elements of today's technological development.

There are copious amounts of tense action in Continuum. Some of it is green screened, but the series has a highly polished, professional feel, slick and polished. There are explosions, chases, some fighting, a lot is thrown into the first episode. Rachel can handle the action, and has glorious fun doing it.

Once in 2012 Kiera calls for help on her future transceiver, and finds a young teen in a barn working on an experimental frequency, is the only one actually able to hear her. It turns out he is in the early stages of developing the technology. Keira also finds a sympathetic 2012 police officer played by Victor Webster, so she does at least have a bit of help tracking the gang down.

Ok No more info, no more spoilers, check out this sci-fi blast of coolness! I really like opening episode "A Stitch in Time" and rate Continuum an 8 out of 10. Creator Simon Barry gives the audience solid opening episode and sets the premise for the new series. Currently it is only available on Canadian TV on Showcase, but blast your Browsers over to the official site and maybe check out a few clips @ http://continuumtheseries.com/
Posted by Dan's Movie Report-Danny Templegod at 11:40:00 AM