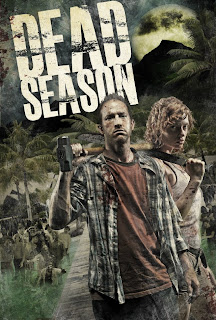 Above Pic: Poster of Dead Season from IMDB

If you follow her on Facebook, you are automatically entered into the prize drawings on Dan's Movie Report! So do it, and post on her page.

Rather than droning on and on about how good Dead Season is I just have to make a few comments about this "trapped on an island zombie flick".  For the first time ever I watched a Zombie film that took time to delve into the human side of a zombie attack, people's emotions, and fears outside of the zombies.

The two central characters Elvis and Tweeter are looking to go to a retreat island off the coast of Florida that "supposedly" has no zombies. Rather than thrust us right into the zombie killing there is strong character development, even showing us the plight of a young boy who tweeter takes in. The deciding what to do with a person after they are bit, the wrestling with how to obtain food and supplies.

On the island the two leads meet up with an ex-military guy who runs a compound of survivors. His cronies keep the zombies at bay with locked gates and weapons. The audience is treated to a host of characters in the compound, who all have their own personal demons as they struggle to survive on the island overrun by zombies from a passing Dutch ship, that ran aground a few weeks prior.

Once the action gets going, body parts are cut off and some jiggly bits are exposed, and egos are bruised! This is not a film for kids, there is copious amounts of gore, and blood as well. Also there is nudity, if you are offended by people with there clothes in off position, turn away! 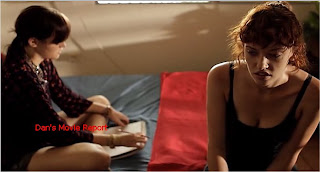 Marissa Merrill (Tweeter) and Corsica Wilson (Rachel Conrad) plot a way to leave the island, showing a softer side to Dead Season

The acting is very good, people actually look frightened, nervous, and aggressive when need be. The four leads James Burns as Kurt Conrad, Scott Peat as Elvis, Marissa Merrill as Tweeter and Corsica Wilson as Rachel Conrad did a fantastic job. Burns plays the tyrannical leader with a heart and sweet Corsica plays his daughter locked in her room, with a desire to leave the island. I enjoyed Corsica's daughter portrayal, as she shows not only underlying fear, but guile and intellect, she is a young actress with a bright future.  Marissa Merrill really stands out as the lead female, with not only a burning desire to leave the island, but a feral passion to kill zombies, that is fun an at times scary cool to watch, her eyes drip with emotion and my new word of the day pissedoffedness! If a zombie is around, I would love to have Ms Merrill protecting me, haha! Scott Peat is the level headed guy with an intellect, struggling to stay sane in the land of the zombies, a complex character indeed. Even the people playing the zombies are cool, eerie, and frightening. 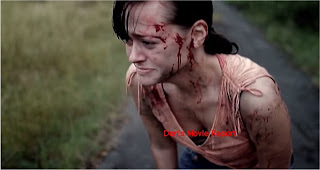 I loved this film. It has repeat watch-ability, great scenery, crazy slow moving zombies, a few fast ones who have evolved. Producer, writer, director Adam Deyoe paints a sordid, yet human drama wrapped in a package of violence and pain. Even the musical score from Louis Chalif is eerie and mood-setting. I recommend a purchase all the way if not you deserve to be eaten by the zombies in this film or be roughed up by Marissa Merrill, I choose the latter! I rate Dead Season a 9 out of 10, one of my top indie picks of the year so far! (Yeah I saw the one Zombie who commented, Zombies and Morons will not like it, especially the anonymous ones! HAHA!)