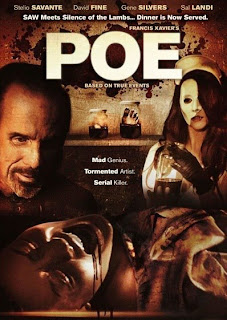 Being a huge fan of the works of Edgar Allen Poe, this film has been on my radar for months. Francis Xavier paints an sordid tale of the life of a doctor turned serial killer by the name of "The Chef".

As a film, Poe for the most part, does fall flat on the acting side, I wish the actors would have shown more emotion. This would have given the audience more connect to the story. There is a pensive disconnect theme which runs throughout the film, much like the literary themes Poe used. Often a character seems to be looking off into space, this is probably setting the foreboding mood, such as the scene prior to the first actress being abducted, there is a pause. The lead actor David Fine (Dr. Andrew Casey-The Chef) has a subtle yet creepy quality. He whispers his demands to his victims, instilling fear.

Actress Christy Sturza is convincing as The Chef's first unsuspecting victim Sophia Tan. She is brought into his lair by a big hulking guy three times her size.  Christy put some emotion into her character, and the apprehension, and fear she displayed made for an entertaining scene. Hopefully she will be in more films. 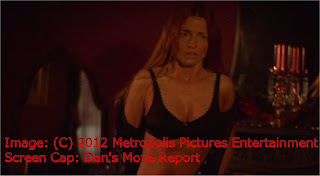 Most of the script is decent, and is written in somewhat of the same style in which Poe would write, mysterious, gloomy, and ambiguous. The movie is wordy, and more often than not this leads to a big audience turn off. The execution of the dialogue, however, does not match up to the script. The passion is just not there most of the time.

For special effects the limitations are evident, but I have seen far worse. Transitioning from scene to scene is not as smooth as it could be.this is obviously budget and time constraints, and lack of a larger film crew.

Overall, I cautiously recommend the film, but only to those who enjoy loquacious story, character account type films, and are fans of the writing style of Edgar Allen Poe.  I am interested to see what Mr. Xavier comes up with the next celluloid go around. I give Poe a marginal passing grade of 4.5 out of 10.

An official website for Poe is set up @  http://poe2012.com/  Check there for more detailed information about the cast and crew. The film is available for order below on Amazon.