One In The Chamber Movie Review 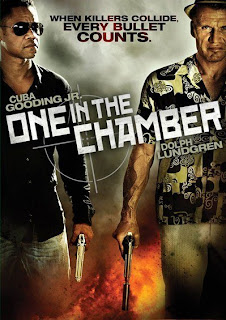 Above Pic: Poster for One In The Chamber


After his academy award Cuba Gooding seems to have found his niche in smaller budget action films. One In The Chamber has Cuba playing an assassin named Ray Carver who tries to play both sides of gang war violence. Opening up with a wild shootout against the Russian Suverov gang, One In The Chamber starts out with a bang, with Carver trying to assassinate one of Russian gang's big bosses.

About 25 minutes in the movie takes and uplifting and sarcastic action turn when we are introduced to Dolph Lundgren's character Aleksey Andreev. He approaches four thugs and they say "So they send a dog to pick up the scraps, Dolph reply's "No they sent a Wolf!"

The narrative from Cuba's character, sometimes hokey dialogue, and disjoint plot points detract from what could have been a pretty decent action picture. Following the opening action sequence, Cuba's character starts into a diatribe of introspective that is rather tedious, and actually detracts from the flow of One In The Chamber. This is NOT the fault of the actors, it is obvious that they are trying their best to deal with the source material.

Aleksey arrives as a hired assasin, and is asked what he does. He calmly states, he plays chess, fixes 70s cars, repairs 90s pinball machines, and for the right price hi MIGHT kill anything that breathes. HAHA. Come on man, that is just ridiculous, but I am not gonna lie, I did laugh especially that Dolph is wearing a mufti-colored Hawaiian shirt while saying this, in fact he seems to be on permanent vacation in One In The Chamber.

Well the Russian gang goes after the Czechoslovakian gang, and  more action ensues. Again though the action in One In The Chamber seems to move at a disjoint pace. Their is no urgency to the proceedings of the 90 minute film. I really wanted to like this film as I admire the body of work of both actors.

There is a decent fight between Dolph and Cuba about an hour in that propels this film to a "rent it" status. Actually I believe with a better script and film the two could make a decent "team". The fight is well choreographed, and marks a change in direction in One In The Chamber.

Overall, I have to give this film a rent at 6 out of 10. One In The Chamber is not the worst action movie, honestly though, my expectations were higher.