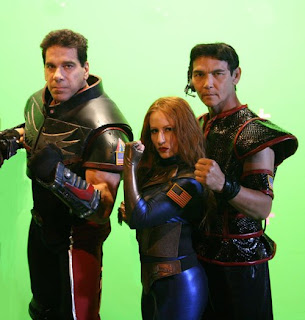 As a supporter of action and short films thanks to actress Tara Cardinal, who plays Gaia, I found out about this cool film starring Lou Ferrigno called Liberator. The plot description from the film's producer is:

Ed Migliocetti (Lou Ferrigno, "The Incredible Hulk") has served his country. When the war began, he put aside his football career to sign up for the military. And when the powers-that-be drafted him into the Enhanced Abilities Initiative, he became The Liberator.

Teamed with supers Sidewinder, Gaia and Volt, Liberator represented the best of America. Or so he thought. He soon found himself doing the government's dirty work: assassinations, regime change, infrastructure sabotage. Through it all, Ed followed orders. He was a good soldier. But when a black op went horribly wrong, Ed was thrown under the bus the fall guy. In the blink of an eye, the Liberator literally went from hero to zero. After serving a decade in federal prison, he emerged a pariah. In the eyes of the public, he was a traitor. That, quite frankly, he could take. What he couldn't take was his own daughter Sonya (Jessica Jade Andres) hating him. 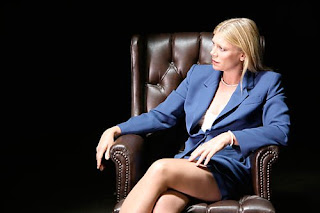 Determined to set the record straight and win her back, Ed pens a tell-all book that immediately draws the ire of his former chief General Augustus Pollard (Michael Dorn, "Star Trek: The Next Generation" ). Pollard dispatches undercover spook Marla Criswell (Peta Wilson, "La Femme Nikita") to investigate. When they realize that Al plans to blow the whistle after all these years, they have no choice but to take him out.

After Ed battles his way out of a US military contractor compound, President Whitlock (Ed Asner, "Up" ), declares the Liberator Public Enemy Number One and sends his old teammates (Don the Dragon Wilson and Tara Cardinal) to bring him down by any means necessary.

But this time, the Liberator is not going down without a fight.

The film is actually intended to be a test as a possible pilot for a TV series or feature film. The film has a premiere upcoming this Saturday! 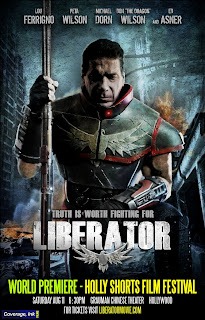 LIBERATOR will be Saturday, August 11th at the world-famous Holly Shorts Film Festival.


We are headlining the Saturday night Sci-fi/VFX block. The screening will be at the legendary Grauman Chinese Theater on Hollywood Blvd., Hollywood . There will also be a Q&A afterwards with the filmmakers. We couldn’t be more excited, and we hope to see you all there!

Many ways to connect with Liberator:

Blast your muscle bound browsers to the official site @