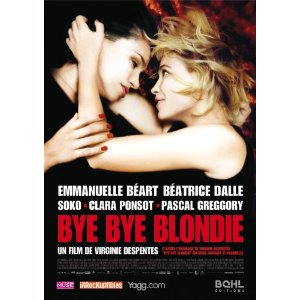 
It is no secret that I have a special place in my heart for unusual French films. Movies that push the envelope, heighten senses, and with salacious undertones. Breaking the chains of at times tepid U.S. counterparts the French seem to seize the passion and intensity of real life, instead of the glitz and glamor. Twelve years ago Writer/director Virginia Despentes pushed the envelope to the extreme with Baise-Moi, a film about two women who are pissed off at life, the world and men as they were raped in the beginning of the film. Ultimately they go on a terrible rampage, sodomizing and killing their victims. Not only does the film not have a happy ending, one of the lead actresses Karen Lancaume took her own life in January of 2005.

Fast Forward to 2012, Virginia Despentes is back with a new blast of aggressive punk filled energy called Bye Bye Blondie. The film about two women who go through a generation of emotion, including love, anger and happiness. Emmanuelle Béart portrays Francis, she has a successful career as a TV Host and a marriage to a guy who in all actuality has little emotional attachment to her Béatrice Dalle as Gloria is a down and out artist, street punk, with a salacious heart.

What makes Bye Bye Blondie a treat to watch is the emotion a the characters display. Two younger actresses play teenaged versions of the two ladies, and we see their angst and energy. Soko is the younger Gloria, she is a rebel, listening to punk music and just throwing tantrums, eventually she lands in a mental hospital, thus meeting the younger Francis Clara Ponsot who is in the facility for amneisa.

The film is aggressive, but never too much, and mostly a drama-comedy about  life, love, and friendship. Virgina's directing hand is solid as the four leads, deliver their lines in a succinct manner. The experince of the older actresses Beart and Dalle really shines here. The two have down to earth demeanor and display a realness to their respective characters.

As great as Bye Bye Blondie is, it may never find a wide audience, due to the subject matter, even though it is lighthearted compared to Baise-Moi. Bye Bye Blondie is an exploratory film about relationships, and how they change, and people grow apart. The fact that Bye Bye Blondie actually shows the two characters as younger people, after they adult characters are established, how the met, the problems they go through, makes the film rather unique and enjoyable.

Technically the film is of course in French, I viewed the version with subtitles. The lighting, background, and other various film aspects add a perspective to the stark differences between the two leads as one lives in a virtual warehouse and the other in an opulent multi-level place.

Overall, I enjoyed the film, the talented and innovative Virginia Despentes has another notch on her film belt. I recommend a buy,buy! on Bye Bye Blondie, the film rates a 7 out of 10.

To all of my French Speaking Readers the Bye Bye Blondie book is available on Amazon: Also the film is available @ amazon.fr