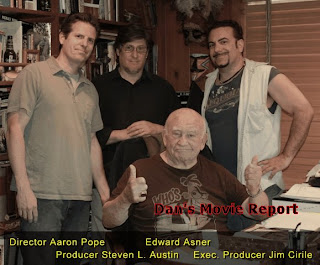 Merry Christmas! The year of action official comes to a close, with a big interview of the creators of the new Lou Ferrigno film LIBERATOR. Jim Cirile and Aaron Pope chat at length about how they secured funds and big named stars for their short film. Watch for more interviews and exclusives from this fantastic film in 2013! Enough of my ramblings, on to the chat!

How did you come up with the idea for Liberator?

Jim Cirile: Lou Ferrigno is a friend of the family, and I’ve known him and seen him at gatherings for years. I mean, how could you not? I remember it was 12 years ago, my birthday party in my crappy little apartment, and in marches Lou with my brother-in-law. The dude stole the show, signing autographs, telling stories and doing chin-ups on my doorway chin-up bar, which was barely up to his navel!

I always thought, here’s this cool guy who is world-famous, but is really underused. But he’s always been an inspiration to me. I started thinking about what life would be like for a hero like Superman or Captain America, someone closely associated with Americana, if that person were to live through the political climate of the last decade or so -- where the maniacs are in charge of the asylum. It dawned on me that they would use him, abuse him, then throw him under the bus when he was no longer useful to them for propaganda purposes. And then bam, it all just coalesced in my head one day – aging superhero who truly believes the American dream, and who was exploited and then discarded. What would it do to that guy? You know, literally from hero to zero. One day you’re the golden boy, the next you’re OJ. You’d be pretty frickin’ pissed off, right? And now suppose you couldn’t tell anybody the truth because of NDAs and even your own family thinks you’re a piece of shit. And suddenly I had my perfect role for Lou – a pissed-off, washed-up, disgraced, aging superhero who was screwed over big-time.

Now suppose that guy says enough is enough, and he decides to talk?

Did you work with Lou from the beginning? If not, how did he become involved initially, if so has he helped with the story?

Aaron Pope: We knew we wanted Lou for this part, but we spent some time developing the script before sending it his way. We wanted it to be perfect. But eventually we knew it was good to go so we sent it Lou's way and he responded to it immediately. He wanted to play this role as much as we wanted him to do so, and what we found out almost immediately after he got attached was how big of a fanbase he has out there. Everyone we told we were bringing Lou back in a superhero role was totally geeked out by it.

How did you get the financing for the Liberator project?

JC: I dug deep into my pocket! Seriously, originally this thing was supposed to cost ten grand. But as we developed the script we realized we needed to bring the super. Of course, part of it was me as producer wanting all these amazing genre names, so you know, the budget climbed pretty quickly. We had enough dough to shoot five days of principal, and then I ran out of cash. But then we had a Kickstarter campaign where we raised another $26K for two more days of green screen and fight stuff, which really made the difference. I wish we had another 20K to put towards the VFX, but you know, you go to war with the army you’ve got, as some miserable douche-bag once said.

Did you always want Liberator to be a short test film or did you at first want to do a full feature length?

AP: We've always wanted Liberator to be bigger, whether it's in feature form or as a TV series. So when we wrote the short version, it was always with an eye toward setting up something that people will want to see more of. How about casting, how did you secure the services of Michael Dorn, Peta Wilson and the other stars?

JC: It all started with Lou of course. He was our first and only choice to play this role. Now I will tell you that we did have interest from one other well-known actor, who had starred in an action/adventure TV show, who wanted to do it. But Aaron and I knew Lou was the one we wanted for this role. I always knew he had a great performance in him and he nailed it here. I Love You, Man cinched it for me.

As for the others, I’d worked with Ed Asner a few times. I’ve directed some political commercials that he did the voice-overs on. So I contacted his assistant and after literally months of trying to find a hole in Ed’s schedule, we got a call – Ed has about 4 hours free on Memorial Day. Can you come over to the house and shoot him there? And so we all canceled our barbecues, and we did exactly that! Once we had Ed, it was pretty easy to get the rest of the cast. An Emmy-winning actor who is the former president of SAG? Yeah, once Ed committed we simply called up the agents of our first choice actors – Michael Dorn and Peta Wilson – and locked them down pretty quick.

How has social media and the internet helped Liberator secure a wider audience?

AP: It's just the nature of things these days. If you don't have a social media presence, you're D.O.A. It's the way people find out about things. So we set up our website, Liberatormovie.com, right off the bat, as well as a Facebook page and a Twitter page, and we integrated all of those things into our Kickstarter campaign, and it all just seems to build on itself. Like I said earlier, there's a huge groundswell of support out there for Lou so once word got out that he was coming back to the superhero world, the news spread over those social media outlets in a hurry.

Do you feel that Liberator would make a better stand alone feature film or a TV series?

JC: Yes. (laughs.) We have both versions – a 1-hr TV pilot and a feature script (actually three.) We’re talking to people now. The best part is, the feature(s) does not preclude TV. Just the opposite in fact.

If you had to change something about Liberator what would you do if you obtained full funding for a TV Series or feature film?

JC: We have this whole elaborate mythology worked out, so whichever form Liberator takes in the future will likely differ from the short in certain ways, but will always be internally consistent. By that I mean we had to really condense the story to make it fit in 18 minutes. So while it may seem like Act 1 of a movie, in reality, a movie Act 1 would be structured rather differently. But all of those scenes and moments would all likely wind up in there in one way or another. However, certain characters will be greatly expanded, such as new Gaia & Sidewinder, as well as original Gaia and Liberator’s ex-wife Ginnie. There is also a new Super called Nucleus…

Do you have future scripts written in the Liberator "universe"? Future villains?

AP: Absolutely, we've developed the full Liberator Trilogy. There are plenty of new villains to come in the sequels, though there's always a political center that these characters emanate from, and that political center has connective tissue that runs throughout the entire of the Liberator storyline.

With a long focus on Liberator, do you have time for any other projects in the works?

JC: You bet. We’re shooting a horror film this year called Twisted, directed by Aaron and written by Liberator second unit camera Tanya Klein and me. We have a last plane-in-the-sky-during-nuclear-Armageddon thriller called Fallout which we’re hoping to make as well, but we’ll need larger financing for that one. And we have a couple new action/thriller spec scripts hitting the market next year. Aaron is also directing a horror movie called Cropsy, and we both continue to develop screenplays for both Hollywood prodcos and individual clients through my company www.coverageink.com. Crazy-busy, but that’s always good. You know, in Hollywood, anything that is an absolutely, 100% guaranteed, sure thing is at best a remote possibility. So one needs to have as many plates spinning as possible!

How does it feel now that Liberator is scooping up awards?

AP: Well, my hats don't fit anymore. No, seriously, it's gratifying. We didn't get into this for the sake of awards though. We're just a couple of guys who are into superhero flicks and who didn't buy into the idea that they could only be done at the studio level. We wanted to do an indie superhero movie, and most importantly, we wanted to do a movie we'd want to see. And that's exactly what we did. But now it's gotten out there and started to pick up a few awards (the Award of Excellence at IndieFest and Best Narrative at CalShorts) and it's just great to see that there are other people like us out there that think you can tell this kind of story without brand names and big budgets.

To be totally honest though, it's not the awards that really make me happy so much as that huge response we always seem to get when our first fight scene ends. The first time it screened, the audience broke into spontaneous applause at that point, and it was then that I knew we'd made Liberator what we'd always wanted it to be... a fun ride.

Thanks so much for the chat, Ho, Ho, Ho!

For more info on Liberator muscle your browsers to http://liberatormovie.com/
Posted by Dan's Movie Report-Danny Templegod at 11:19:00 AM