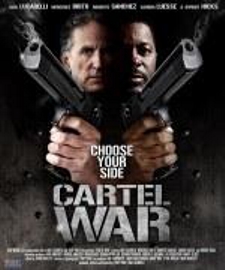 Before I begin this review, I found out Cartel War was originally called Disrupt/Dismantle and was filmed in 2010. Although shot on a very low budget, Cartel War spins a torrid tale of deceptiveness, drugs and absolution.

Lying is often the way a drug gang is infiltrated by the police, and Cartel war tells a story loosely based on a Mexican Drug Cartel of a detective with a personal axe to grind with the drug dealer trying to take him down.

In Cartel War the gang is led by Catalina (Mercedes Brito) and Antonio Vega (Roberto Sanchez), a ruthless brother and sister team.  Hot on their trail is a police veteran Mike Marino (Jack Lucarelli) Sandra Carolina portrays Gina Cassidy, she volunteers to be sent in to take down the gang.

Now the players are established, the well thought out Miami Vice (the film) style drama unfolds. Sexy women, fast cars, drugs, all wrapped up into a surprisingly slick 93 minute package. Cartel War keeps up the pace, as more bodies show up dead. Even though the plot has no real mystery aspect, the action and quality acting makes up for it. 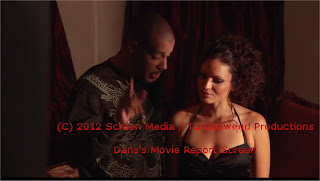 Above pic: Sandra Carolina as Gina, learning about Antoio Vega's  (Roberto Sanchez) drug operation, while Vega is blinded by her beauty.


While all the acting is quite good, honestly, the ladies steal the show here. Mercedes Brito, steams up the screen with her come hither sultry bad girl persona, not to be out-done, Sandra Carolina has a panache with her mannerisms aggressive yet, at times surprisingly reserve and passive. Crime drama's that have a strong balance of female lead characters are not only far more entertaining to watch, but also allow for further interpersonal character development. 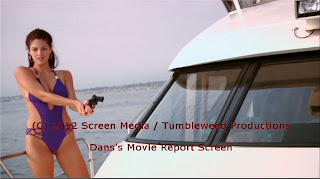 Above Pic: Mercedes Brito as Catalina on a yacht none the less, is hell bent on shrinking her operational payroll, and doing it in a skin tight bikini!


Technically Cartel War is expertly filmed and edited, the movie smoothly transitions from action heavy scene to dialogue heavy scene. Directors Troy L. Price, and Jack Lucarelli (who is also the lead actor Mike Marino) have a firm grasp when to use the action to tell the story, and when to use words to convey his message. In addition Mr. Lucarelli and Mr. Price took their time and make sure the actors have the right facial and body expressions for the specific scene. A great achievement for a film with only a reported 200,000 dollar budget.

Rather than go on and on about this film, spoiling plot points with other asundry ramblings, if you like violent crime dramas watch Cartel War. I rate this movie a solid 7 out of 10, worthy of multiple viewings.