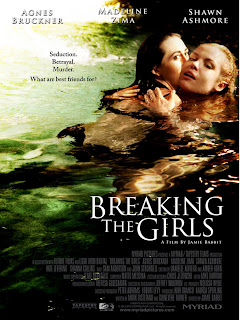 Above Pic: Poster for Breaking The Girls (C) 2012 Myriad Pictures


In a reverse story of revenge, Breaking The Girls tells the wild story of two college girls making a pact to exact revenge on their enemies. Agnes Bruckner portrays Sara Ryan, a law student, who has her world crumble around her when her enemies get her fired from her night job, and then has her scholarship revoked. She meets Alex Layton (Madeline Zima) and  the two begin a torrid relationship.

The clever script plays out like a Mean Girls with a violent revenge twist. The two ladies play a dangerous game of deceit, mostly with Alex initiating, she makes a pact with Sara to murder their two rivals Nina Layton (Kate Levering) and Brook Potter (Shana Collins).

The best part about this film is the dialogue, as the action and such seems to happen off screen. Maybe I watched an edited copy, but this film could have had a  bit more action, and intensity, especially considering the subject matter. 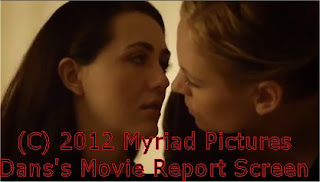 The acting on the other hand, especially by the two leads is fantastic, both women work hard at their roles. Agnes Bruckner is definitely one to watch in the future, she has talent, and obviously takes the time to delve deeper into her character than the words on the script. Breaking The Girls is a defining role for her. Alex Layton portrays the devious bad girl with vim and vivacity.

A story with female leads, centering on young people, is sure to play well with the younger audiences, Breaking The Girls delivers the girl meets girl, girl loves girl and girl plots revenge story. Director Jamie Babbit, and screenwriters Guinevere Turner and Mark Distefano take time to develop a clever tale, tantalizing the audience, and making viewers care about the characters, even though the entire film runs under 90 minutes.

Even with the mostly off screen action, implied romance, (no nudity, sorry kiddies) I rate Breaking The Girls a solid 7 out of 10, a very good story worthy of a watch.

Agnes Bruckner, who is also in The Baytown Outlaws  has an official Facebook page @ https://www.facebook.com/pages/Agnes-Bruckner/317678918304842