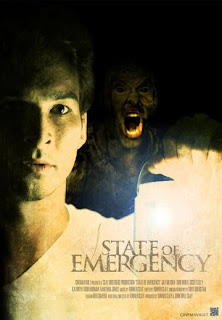 Above Pic: Poster for State Of Emergency


State Of Emergency is a tale of an chemical explosion then an outbreak in Montgomery County. Rather than focusing on the wide scale, State Of Emergency zeros in on the lives of a few individuals and their personal plight with the zombies. Harkening back to old school films, this film relies on the build up, rather than the overt blood and gore of typical zombie films.

State of Emergency opens with the lead Jim (Jay Hayden) watching the outbreak unfold in front of his TV. Eventually Jim tries to get out of town, flagging down the passing military helicopters. They fly on by, but he gets a phone call from another individual holed up in a well stocked warehouse. 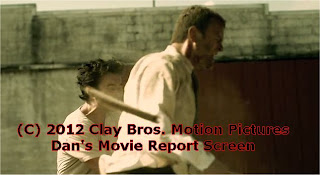 Above Pic: An infected gets a whack on the back, to no effect.


The chemicals turn the infected into monsters, beings with central nervous system infections. These creatures are not only able to run, they have fighting ability, as they are not dead turned to life, but disease ridden. Sadly the makeup on the few who were infected is sparse, but seems to be enough to distinguish them from the "normal" folk.

As much as I enjoyed the premise and build-up, State Of Emergency is more of a study on personal relationships, rather than a true zombie nightmare, and the intensity level seems a bit dialed down. Because the outbreak is in a rural area it is believable that only a few infected persons would be around.

The acting in State Of Emergency is decent, nothing amazing, but nothing to detract from the story. There is a lot of dialogue in the film considering they type of movie it is and for the most part, the rather inexperienced cast seems to pull it off, however, more of a sense of urgency would probably have heightened the film's pacing.

The action in the last 30 minutes of State of Emergency picks-up. I liked the character development, and plot direction in the film, and with a few more dollars, I  envision writer/directorTurner Clay, would have been able to add a few more elements, characters, and accoutrements to the State Of Emergency.

State of Emergency rates a 6 out of 10, a definite rent, worthy of a watch.

For more info check out the official site @  http://www.soemovie.com