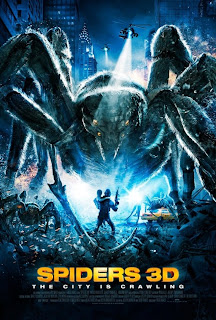 
With my respect for the diverse career of indie icon Christa Campbell, and my full on fascination of spiders, I run headlong, in Spiders, without a web to catch myself! Before I start this review, this is a LOW budget movie, all of my criteria are based as compared to movies of this type. I watched the 2D version. 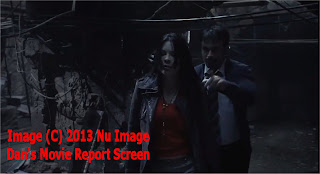 Above Pic: No spider is safe with Christa Campbell and Patrick Muldoon hot on their trail. (C) 2013 Nu Image

{Warning Spoilers ahead, do not read or do!}

Spiders opens innocently enough with the crash landing of an object later to be discovered as space junk from an U.S.S.R era space craft. Ok then, the said object crashes into a New York subway station, and questions arise as to what is it after a man dies on the subway tracks, a third rail scenario. At first it is thought to be a bacterial outbreak, but crack researcher Christa Campbell says wait a minute, it is eggs, and they are completely bacteria free?

Whoa, haha well it turns out that this is actually a military experiment gone awry, a genetic mutation of some sort of alien DNA that was implanted in the spiders, as they were the only earth hosts who could house it, what for you might ask? A bullet proof web from the Queen! 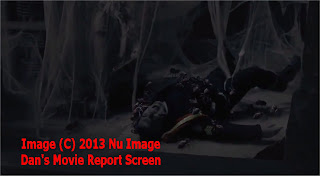 
Back to the film, I actually kind of liked the far fetched premise and Spiders had a Quasi Starship Troopers Feel to it. The acting was rather bland at times, , but I must say, I really enjoyed newcomer Sydney Sweeny as Emily the resourceful daughter of third lead Police Officer Jason (Patrick Muldoon  She showed fear when necessary without going over the top, and a bit of cunning as well. Christa Campbell was her cool and calm self, and played the solid mother of Emily. If anyone knows the actress that played the babysitter of Emily, please let me know, she did a decent job as well.

As for the additional elements; the CGI was not great, but I have seen far worse. The rendered smaller spiders were better than the queen, the built sets were cool, and judging by the length of the credits many people were involved. Some lighting was good other interior scenes not so much, the scope and scale of some scenes was a trifle off the spiders were either too big or small.  The main problem I had was the pacing, this film needed more urgent behavior from the characters, not sure if this is the intent, as it did pick up ever so slightly towards the end. but the first 40 minutes really dragged, so as a horror film it fails, but works as a sci-fi.

Is this a great film, um definitely no, is this a super bad film um no, Spiders is an average monster based sci-fi, with an homage to old style monster films. Spiders is PG rated, no over the top blood and guts, and no nudity.

Overall I would say a rent, Spiders rates a tangled web of a 5 out of 10 score.

Here is the amazon link: