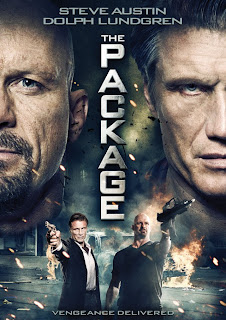 
Hard to believe it was a eight years ago I interviewed "The Package" Director Jesse V. Johnson for the film Pit Fighter. He not only has an eye for action he has a solid balance of characters in his film. The ladies are not the usual window dressing.

Fast forward to 2013, Jesse, Steve Austin, and Dolph Ludgren serve up a rather entertaining package in The Package. The story set up is seems like a simple job, deliver package, don't look at it, etc...Ah but this is Austin and Lundgen, packages never come easy, As there are a myriad of dangerous thugs along this delivery route. 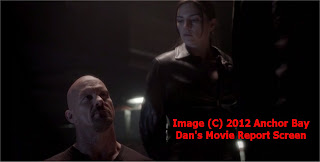 
There is violence, fighting and gunplay, with several lines of dialogue singed with sardonic humor. My favorite scene in the film is a particularly violent, maniacal, sadistic, reverse torture scene in which Steve Austin is bound to a chair. The violence purveyor. a tall and wild eyed lady named Monique. Yeah that is her real name, and character name! Check out her exclusive interview on Dan's Movie Report! http://dansmoviereport.blogspot.com/2012/01/monique-ganderton-interview-c-2012-dans.html In The Package, this character resembles a person who is alive, haha and trust me there is no coincidence!

Although some of Dolph's dialog is bland at times, not his fault, the script itself needed fine tuning, I like the way he deliveres the mannerisms in his role, especially as he reveals the true nature of his character toward the end of the film. Austin has the better lines, and although a man of few words, his words have bite, meaning and seem to flow better.

There is slight twist  at the end as to what is "in" the package, not gonna lie on first watch I did not like it, but the second time through, it makes more sense, even though the full 95 minute film is rather simplistic.

Why is this review so short? I do not want to spoil plot points or some of the creative ideas put forth by Jesse V. Johnson in The Package.  If expertly directed, independent action with Austin, Lundgren and a violent, yet surprisingly nurturing, Canadian named Monique get your blood boiling, buy it! If not, rent Hope Floats, and cry in a damn corner haha! This Package rates a 7 out of 10.

Click the link below for purchase! Amazon has a pre-release discount on the DVD-Blu-Ray combo pack until February 19th!