AuditoryARMory, live for the underground! 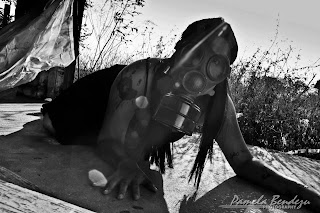 
Metal heads and purveyors of mayhem, Get ready for the auditory explosion that is AuditoryARMory. The Orlando based band is an amalgamation of talents and diverse styles. Blast their official FACEBOOK @ https://www.facebook.com/auditoryarmory?ref=ts&fref=ts

Genres: Other / Singer Songwriter / Progressive
Members: APRIL ROSE -- Guitar, Vocals; OSCAR -- Drums; DENNIS -- Guitar; JUSTICE -- Bass
It is hard to label the music of AuditoryARMory, as members April Rose, Oscar Garcia, Dennis Burns, and Justice Maynard have a wide variety of influences. Both April and Oscar started studying music at a young age and earned their Bachelor’s degrees in Music. April and Oscar started making music together in October 2010. In 2011, they started to get recognized in the Orlando music scene for their raw and energetic live performances. Late 2011, Dennis Burns and Justice joined AuditoryARMory to give the duo a fuller, richer sound.
For AuditoryARMory, it's all about the music. They seek to reach their audience with their music and hope that each person can establish personal meaning with each song in his or her own unique way. AuditoryARMory draws from many genres of music, including progressive, jazz, metal, rock, blues, funk, and classical. Some of AuditoryARMory's influences include: Porcupine Tree, Tool, The Dresden Dolls, Kate Bush, Fever Ray, Dream Theater, A Perfect Circle, Tori Amos, Ani Difranco, Megadeth, and Jeff Buckley.
Oscar is also known for his past work in well-known rock acts in the area, such as Over the Radar and Running Blind. April is also currently the cellist in the heavy gothic metal 8-piece band Fields of Glass with Dennis and Justice.
AuditoryARMory released their debut album, Anomaly, on March 2nd, 2012, which was recorded with original drummer MJ Mike Owens late 2010. You can purchase the album and other merch at a live show or on auditoryarmory.bandcamp.com

In 2013, AuditoryARMory is still playing live gigs and working on recording a new album.

Check out their Music and Merch on Band Camp @ http://auditoryarmory.bandcamp.com/album/anomaly