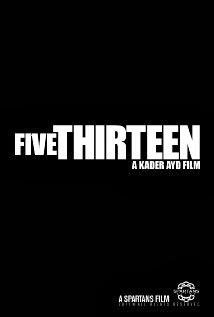 The complex plot of Five Thirteen revolves around two brothers, Mike Avelawance Phillips and Tre Malik Barnhardt , The younger brother Tre served four years in prison for a crime he did not commit,  Mike the older brother agrees to do one last job to allow Tre to be free from the criminal element and protect his young daughter. Incidentally 513 is the temperature of a fired bullet, and has other significance in the film.

What evolves in the 110 minutes of Five Thirteen after a cop is shot, is a downward spiral chain of events, a complex story with crime drama nirvana!  Many criminal factions are at work in Five Thirteen. Drug King of Miami Stephen Bauer needs a kidney. Danny Trejo as El Loco wants his money and will stop at nothing to get it, wants to get the kidney to him, corrupt bankers, dirty cop James Russo. In addition to all of that a corrupt bank is robbed, an inside job, little do the robbers know about, the money launderers and their connections. Whew a lot to process.

Above Pic: El Loco (Danny Trejo) lets everyone know who the craziest one in the room is, as his lady played by actress Kikey Castillo is ready to drive the point home with a bullet!

Rather then delving into specific plot points, that would spoil it, I will focus on the fact that the sheer amount of double and triple crosses are worth the watch and the absolutely over the top villains. First up in the villain category is Danny Trejo, a bad ass Mexican smuggler known by the name of El Loco, his reputation as El Loco began humbly, ok maniacally ha,  when at 13 he stabbed to death, with pencils, two guys raping his sister. Tom Sizemore plays a double crossing foul mouthed criminal named Glen. Glen just doesn't care, he wants to get paid, and not to be messed with. In one scene he tells a woman involved in a double cross who pulls a gun on him,  "Don't point your gun at me, I will kill you by looking at you!" He is brash, spits a lot and has the eyes rolling back into the head attitude, a treat to watch! Stephen Bauer, has a small role, wish his character was more developed, but the film did establish he was sick and needed a transplant to survive. James Russo is the dirty detective, who manipulates Tre and several others to serve his own ends. Russo is well suited for his role in Five Thirteen.

Above Pic: Gus (Tom Sizemore) is about to get angry, soon bullets, insults and saliva will fly!

The actors who play brothers do a decent job, and the plot in FiveThirteen relaxes enough, thus allowing for some solid character development, and for the audience to understand the story. Shootouts, bank heists, colorful characters, and thankfully no sappy love story, save for a short "baby momma drama", make Five-Thirteen an entertaining crime drama for a late night viewing. I rate Five Thirteen an 8 out of 10.

More info on Five Thirteen can be found @ https://www.facebook.com/FiveThirteenMovie