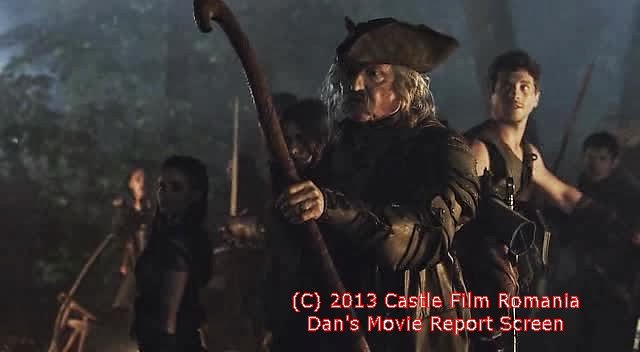 Above Pic: Jom Voight leads a small force, with the untapped Lightbringer

After watching Pearry Teo's The Gene Generation, I was quite interested in what ideas he would put forth in his next feature length effort. Dracula begins with a mix of sepia toned story boards mixed with live action as we learn of the creation of the Dark Prince. Teo again as in Gene Generation emphasizes the look of the characters and costumes, he is a master at selling atmosphere. 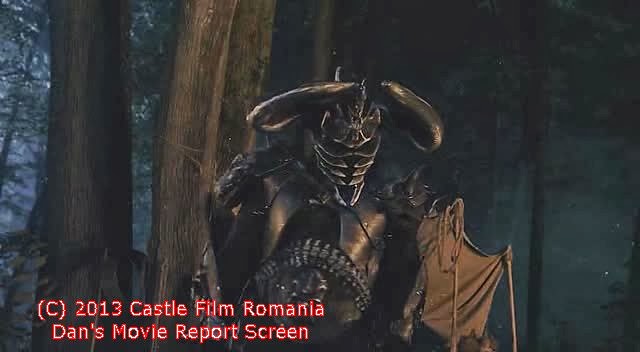 Above Pic: Horns up for the demon, servant to The Dark Prince.

Van Helsing  (Jon Voight) is searching for the Lightbringer, a special weapon that can hold send the dead to the realm beyond the living. Sword fights, horses, flowery language, and a young lady named Esme who is about the size of a Dixie cup, a very cute Dixie cup. Dracula: The Dark Prince  is all over the place,  Van Helsing has the lightbringer, and the majority of the film is spent as a quest to find Esme's older sister, Alina, portrayed by Kelly Wenham who has been taken by the Dark Knight.

The Lightbringer was apparently the weapon in which Cain slew Abel. Only a direct descendant of Abel can wield the weapon in its more powerful form, which is a walking staff, but when activated has whiling metallic blades, on a multi fulcrum axis, and looks rather radical.

The main  knock on The Dark Prince, is that the film's pacing is off, the sense of urgency to actually rescue Alina is just not as prominent as it should be. The battle scenes are decent, but needed to be more forceful.Some of the peripheral fighters were not active enough. 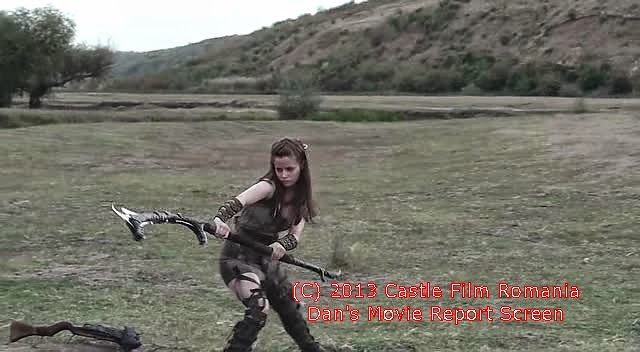 The acting is decent, nothing that detracts, from story telling  Kind of liked the forthcoming attitude of the small girl Esme, portrayed by Holly Earl she seemed to have an adventurous spirit, and stayed in character. Voight had his moments toward the end.

Some cool parts, very good settings costumes, even with somewhat of a lackluster story, I rate The Dark Prince worthy of a rent a 6 out of 10, perhaps a bigger budget, and tighter story would have benefited the film.

Amazon has the film: