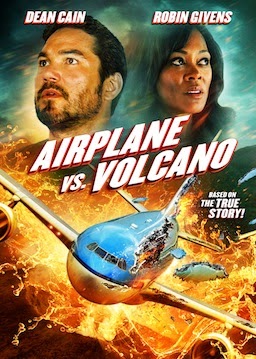 Above Pic: Poster for Airplane VS Volcano

The Asylum is at it again! They seem to have a lock on the formula for disaster films. Airplane Vs Volcano centers on flight 7389 ,which is stuck in a holding pattern over a series of volcanic eruptions in Hawaii.

The situation goes from bad to worse when the pilot and co-pilot are killed during the volcanic storm, enter our stoic hero Dean Cain, who takes over the pilot's seat and proceeds to attempt to save the lives of the passengers, by looking for a place to safely land.

On the ground are a set of serious  military types intent on saving as many people as they can, but not putting their men in danger. Also on the ground, in a stroke of casting brilliance akin to Denise Richards as a nuclear scientist is Robin Givens as a volcanologist. The first thing that pops in my head about her is of course the study of oozing magma flows. Deflecting the lack of intellect, Airplane Vs Volcano is not a bad little thriller, as the tension is kept high by the characters on the plane, a young mother and her son, a psychotic man, on the verge of a breakdown, an air martial wound way the hell to tight, and a stewardess who is just about the most annoying person on the planet, or in this film 10,000 feet off the planet.

Airplane VS Volcano follows the typical Asylum parameters, inconsistent CGI, although it is a huge step up from a few years back, and dialogue the is a "let's state the obvious" then react.

With the recent popularity of Sharknado, and many of the other Asylum films, I am sure this will be a big hit on the SyFy channel and DTV. The elements of action, and intensity are there even if it is on a much smaller scale. Actually The Asylum are improving a bit, and hopefully, will break away to action films and solid crime dramas, which also could be another niche market for them.

Robin Givens is decent in her role, not sure she is a capable volcanologist. Dean Cain actually is a very good actor, hopefully he can launch his career back to "Super" heights again. Airplane VS Volcano rates a 6.5 out of 10, not awesome, but a decent 90 minute popcorn flick.
Posted by Dan's Movie Report-Danny Templegod at 1:58:00 PM