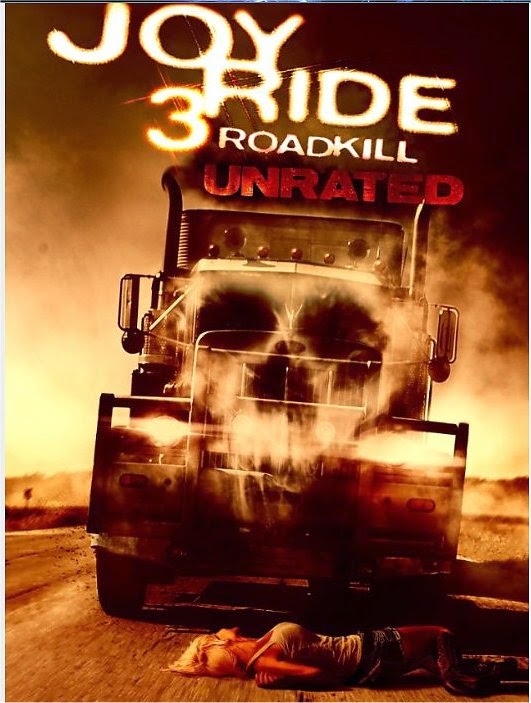 He is Back, the anti-hero/psycho Rusty Nail! The Joy Ride series is an od lot as the sequels are far apart, but follow the same Stephen King Duel meets Texas chainsaw massacre, minus the chainsaws! For the third installment, the film opens where we see two very thing young people all hopped up on drugs having sex and the meth had chick needs another fix so she screams at he boyfriend, and sais I need my fix! So of course he has to stop having sex mid coitus and he says he has no more drugs, but has this wonderfully pleasant Idea of luring an unsuspecting trucker to their hotel room, and clobber him over the head to take his money to buy the drugs.

Note to self; two scrawny whacked out kids together weigh less than Rusty Nail, the kid grabs a lamp waiting to clobber him, but of course fails, and they are both attacked and chained to his rig in front. They have to last one mile to get the meth taped to the windshield, and guess what happens, all this before the opening credits!

Actually the pre-credits part is one of the best scenes in the film, as the rest of the film is spent with a racing team, who initially cuts Rusty Nail off, and then have to pay the price, with vice grips and snow chains!! The middle of the film dragged a bit, but had a solid ending, of course leaving it open. The acting is average in Joyride 3, but some of the death scenes and tension are interesting. Do not want to spoil the specifics, thus the review is left purposely short. Interestingly enough the guy who plays Rusty Nail Ken Kirzinger has been in so many films, with his imposing frame, he makes a great bad guy, I was rooting for him, as the kids deserved it haha!  Ken has done more than 5 dozen films as a stuntman in his career mad respect!

Another odd highlight was a scene in the diner, and one really creepy and unfriendly waitress, ad a crazy guy who seemingly makes very little sense but foreshadows the entire film! I thought the film was decent, not amazing, but passable as a rent Joy Ride 3 rates a 5.5 out of 10.
Posted by Dan's Movie Report-Danny Templegod at 11:09:00 PM