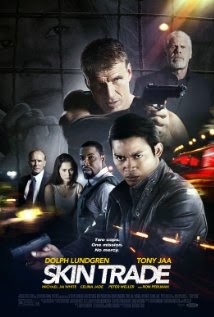 Above: New poster for Skin Trade.


Disclosure: I do not work for the production and was provided a screener to view the film and special permission from publicity department of Magnolia Pictures to post this early review, specifically for those attending the Megacon Convention in Orlando on Saturday April 11th, as Ron Perlman will be in attendance, for info go to www.megaconvention.com. Exclusive live shout out from Celina Jade on the press in Thailand for Skin Trade! https://www.youtube.com/watch?v=FqARRhjUAGU

Update: Auction to support cause against human trafficking! Win Tickets to the premiere of 'Skin Trade' with the CAST! http://www.bluecause.com/auction/attend-the-skin-trade-premiere-with-dolph-lundgren/

In my two decades of writing about an reviewing movies, this has been the first time, I have been waiting for a film in this way. I heard about the Skin Trade, almost two years ago, and as soon as filming commenced for Skin Trade I was actually amazed at the talent assembled on such a production. 'Skin Trade', I am happy to report, not only did 'Skin Trade' meet my lofty expectations, it exceeded them. After meeting Celina Jade at last year's Florida Supercon, when she described in detail about the film in our interview, I must say my interest was even higher. Check out her detailed interview!

Due to the fact I am reviewing this film a couple of weeks prior to release, I refuse to reveal important plot details or spoil it in any way. Nothing makes me angrier than when a reviewer who has early access to a film has to spoil it by revealing important plot points, and characters who have dual roles, like turning from good guy to bad guy, or bad to good. that said, Skin Trade, is a detail oriented story, violent, dangerous, but with heart and emotion. 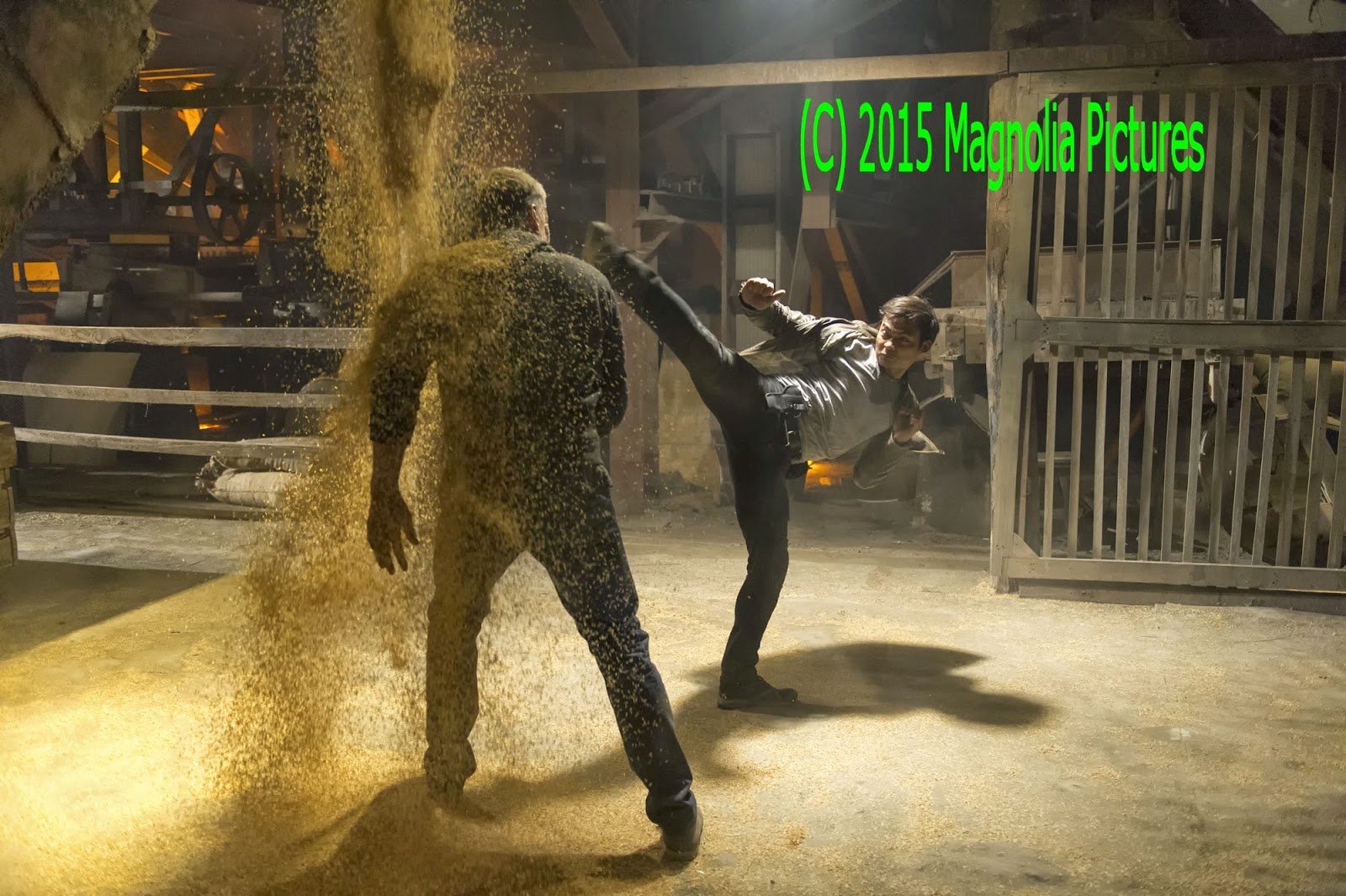 
Skin Trade opens rather innocently, but things are not what they seem. Innocence turns quickly to torture violence and pain. 'Skin Trade' never glamorizes the horrible multi-billion dollar industry, the film blasts viewers with hard realities of seedy dive bars, box car shipyards as transportation, there is no luxury condo, no fast cars, or anything slick and beautiful that makes the viewer thing this is only a movie. 'Skin Trade' transports the viewer into the reality of the Ron Perlman aka Viktor Dragovic and his sons controlling the industry on a variety of fronts. 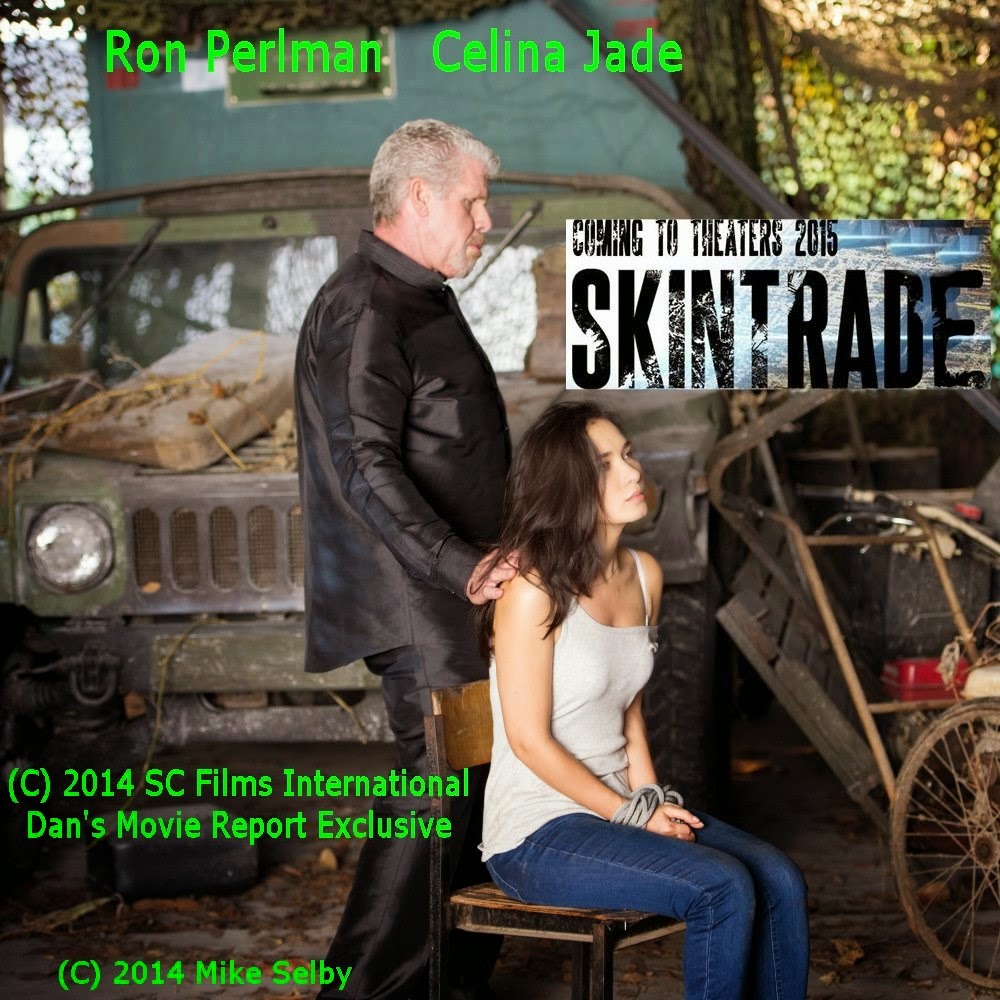 Things are not what they seem, every character in the film has a "second side" whether it be turning bad to good, good to bad or sneaking around playing both sides. Assembling a cast of action stars is very tricky, as screen time and dialogue in a 97 minute film is at a premium. Director Ekachai Uekrongtham not only does this, but allows each actor to display their particular talents in a way to highlight their characters feelings. Everyone of the main actors has an action background, and can fight. Ahh but who to let fight, who to lead, and who to play the victim? That is the question. Rather than spoiling it I will say, the film does have amazing fight scenes, but these are all set up by a story and yes there is a Dolph Vs Tony, and MJW vs Tony sequence, but these are not just ok, let us throw a fight in there, at the time, there characters actually need to prove a point, and with these three, the points are backed up with kicks, fists, and elbows!

'Skin Trade' makes no apologies, it is a hard 'R' rated film, leave the kids in another room, or at home if you go to the theater May 8th to watch. It is super violent, and has images that will last in your mind long after the credits role. The harsh reality of the human trafficking business is on full display in one scene I will not spoil, but trust me, this is not glamorized violence, it really happens.

'Skin Trade' is expertly shot, the lighting, sound, and action are all a solid fit for this type of film. There is a variety of settings in the film, and each setting is detailed and at times becomes it's own character. Many times films forget about what is in the background in a scene is so important, everything from the placement of a lamp, or couch in an inside scene to the look of an outdoor market in a chase scene. 'Skin Trade' nails it, the streets of Thailand seethe with life, and are shown in blistering detail. 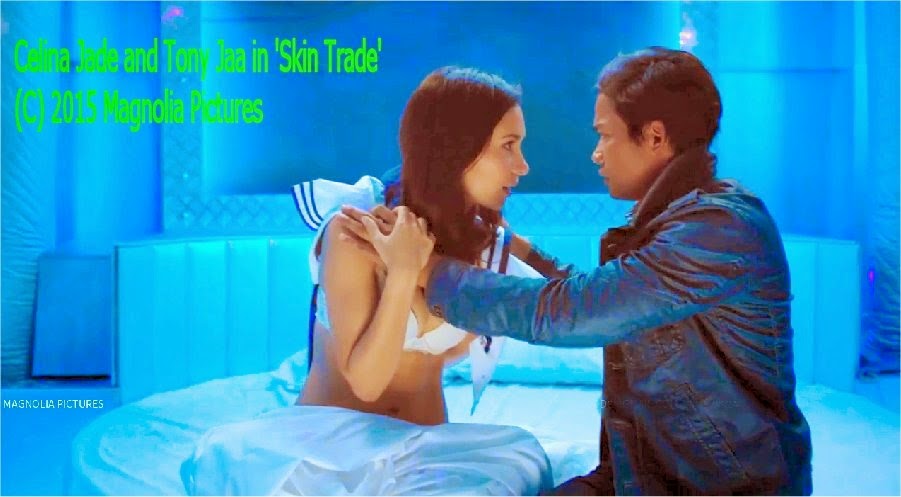 
There are touching moments in skin trade, especially between Celina Jade's character Min and Tony Jaa's character Tony. Tony Jaa had never acted in a soft romantic scene before, and obviously the first time anyone tries a new genre it is tough, Celina, however not only worked hard with him, her kind soul made him releaxed and comfortable, and it shows on screen. Western audiences are ready for Tony, and Skin Trade delivers him! In addition, special mention also goes to Tasya Teles and her portrayal of Rosa Cassidy, she added a human side to Dolphs Nick Cassidy role, she displayed genuine love, and depth to the film. The human side of 'Skin Trade' allows the audience to feel the pain when something happens to the characters.

Special props go to Celina Jade for allowing herself to not be in control of her destiny in 'Skin Trade'. I will not spoil her character, but 'Min' is not 'Shado' and not 'Hiu Wor' from 'Legendary Assassin' she is more vulnerable, but with an honest perseverance that is rather amazing to watch.


Actually all of the actors are perfect for their roles. Michael Jai White, plays Reed, a government agent, with his own agenda, his acing skills have caught up to his fighting skills, and I enjoyed his complex character Reed, and the emotions he had to deal with. Dolph is amazing as well, Nick Cassidy, is a thought provoking man with a message and depth. Cassidy has to go through tragedy to fulfil his destiny.

Very slight imperfections, the running time, although a standard 97 minutes feels a bit truncated. Even five to seven minutes more would have been great. The sheer amount of main characters, made me want each one to have more screen time. Obviously much more material was shot then is in the film and I am sure that once the Blu-Ray comes out  more will come out. The screener I saw was a bit dark, perhaps due to my own equipment, but I am sure once the final copy comes out, it will be amazing. These are very minor issues and do not take away in the least from this amazing film

Overall, 'Skin Trade' has repeat viewing strength, obviously I recommend this film to be purchased for home viewing and it sheds some light about the human trafficking industry. I rate 'Skin Trade' a true masterpiece in film, and give it a 9.5 out of 10, Negotiation, OVER!.

SKIN TRADE is a fictional movie, but human trafficking is very real. I’m an ambassador of CAST Los Angeles, Coalition to Abolish Slavery and Trafficking, and I’m starting a campaign to help them in their fight.
Help me support CAST by donating $1, $5, or $25, and make a tremendous impact in helping survivors of human trafficking.
Text DOLPH to 41444 (U.S. only) or follow this link: http://igfn.us/f/ezu/n (Worldwide)