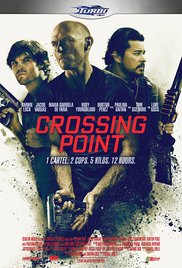 
Greetings Dan's Movie Report readers, today the film 'Crossing Point' is reviewed. Director Daniel Zirilli states that this is his best film to date and is very proud of the way it turns out. 'Crossing Point' marks a change in Zirilli's career as this is a serious story driven film as opposed to the normal action. Ivan wong describes the film on IMDB as A young American couple in love, Michael (Shawn Lock) and Olivia (María Gabriela de Faría) vacation in Baja, but things take a frightening turn when Olivia is kidnapped by drug dealer, who demands that Michael smuggle a backpack full of cocaine-stolen from a rival cartel-over the border into the U.S. within twelve hours or else Olivia will be killed. A good Tijuana Cop is on the trail, as Michael navigates the treacherous underworld of Mexico, and he himself becomes a force to be reckoned with...

I can say while this description is pretty accurate, it does not convey the sombre mood and undertones of the complexity in the story.   'Crossing Point' is gritty, hard, and unforgiving. It is easy to lump it into the 'Taken' category, but it is a different motivation. 'Crossing Point' deals with issues of personal trust, and Michael has to move through the seedy side of Mexico with shards of clues on her location, and to get her back.

Things are not what they seem, and there are many twists and turns along the path of 'Crossing Point', and I am not going to spoil it. Maria Gabriela de Faria, is a great young actress and is given a lot to do, and emotions to convey. She keeps her emotional outbursts natural and believable, throughout the film. Tom Sizemore has a cool role, not going to spoil it, but he is intense in 'Crossing Point'.

The entire film appears to shot with a yellow tinge, perhaps to convey a dusty environment, it looks very cool like Robert Rodriguez homage! In fact 'Crossing Point' should mark Daniel Z's eventual move to directing big budget action films. He keeps his characters focused, even the minor characters in 'Crossing Over' are well cast, and their quality on film shines through.

Overall the 92 minute film, is well written, great musical score, and shows the truculent side of Mexico from the view of someone who did not asked to be put in the situation. 'Crossing Point'  rates an 8 out of 10, a must own!