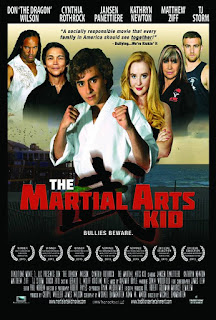 Above Picture: Poster for 'The Martial Arts kid'


Greetings valued Dan's Movie Report readers, today we take a swerve into the family film genre. Kickstarted to the tune of over $175,000 'The Martial Arts Kid' deals with a myriad of real world scenarios. Robbie (Jansen Panetteire) deals with his mom's death, and eventually moves to Florida with his Aunt and Uncle (Cynthia Rothrock and Don 'The Dragon Wilson). Once in Florida life is marred by bulling.

The rest of the film plays out a bit like the original 'Karate Kid' but updated to more of a real world, true life happening. There is a very good backstory tale in 'The Martial Arts Kid', by the time the audience gets to the meat of the story, the characters are well established, and the 103 minute film is the perfect length.

The large cast including Tj Storm, who plays a coach at 'Dojo Extreme' brings a sense of family, home life and honor to a subject that is often swept under the rug. Don 'The Dragon' Wilson waxes poetically describing the martial arts edict, distinctively describing the differences between that and street fighting.  Molding young minds is the message and in 'The Martial Arts Kid' it hits home.

The airy setting of Cocoa Beach, FL and the easy going music allow the viewer to be transported to a vacation like atmosphere, without being preachy. There is a copious amount of dialogue, dealing with relationships, family, and of course martial arts.  TJ Storm's character offers the lead character a choice to learn the more extreme way, 'winners and losers'. TJ brings his forceful, and honorable style to 'The Martial Arts Kid'.

The action is filmed very clearly, yeah! the audience can see the movements and hits. Obviously the main cast have decades in experience in martial arts, and I expected this family oriented film to show detailed form and movement.Of course there is humor, with Cynthia and Don, not everything is stuffy and serious.

After 'The Martial Arts Kid' had its long film festival run, it is nice to finally see a finished product. The retail packaging includes, a theatrical trailer, commentaries from film makers and actors, deleted scenes, and additional material.

The film can be ordered directly from their store, support indie film making! @ http://www.martialartskidmovie.com/shop
Facebook @ https://www.facebook.com/MAKMovie2014