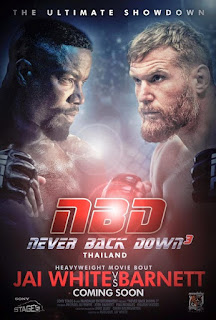 Above Photo: IMDB poster for 'Never Back Down: No Surrender'


Greetings intrepid action fans worldwide, today's entry to review is the newest Michael Jai White directed film 'Never Back Down: No Surrender', For purposes of brevity, I shorten the title to 'NBD: NS'.

'NBD: NS' is a hard hitting, yet thoughtful drama of the trip to Thailand for MJW to help train fighter Brody James (Josh Barnett). The story has many bumps along the way, but 'NBD: NS' is probably MJW's best acting performance. He has a lot of meaty and important dialogue, as he shares his fighting philosophy with the people training with Brody.

The movie develops characters, and by the end we can see that MJW is fighting for a purpose. Watch for small but cool cameos from Tony Jaa, JeeJa Yanin, Ron Smoorenburg, and Brahim Achabbakhe
Adeptly handling villain duties is veteran actor Esai Morales. Morales plays the sleazy fight promoter, ala Don King, without the crazy hair.

Watch out for Michael Jai White's real wife Gillian White who plays publicist Myca Cruz. She seems to be involved in the film in a more personal way, but does work for Esai Morales. I was on the fence initially about her character but she more than redeemed herself by the second half of the film.

The true highlight of any MJW film is most definitely the action.. 'NBD: NS' delevers with hard hitting kicks and punches filmed in a clear light, easy to see and follow. There is a bit of slow motion movements, but used to accent not cover-up the action. The dialogue breathes meaning to the fighting, as the characters are not just fighting for no reason.

Overall 'NBD: NS' is a wild ride, worthy of a purchase, as a bonus we get to see a sneak peak pf JeeJa actually in the ring fighting, she is so smooth like melted butter. 'Never Back Down: No Surrender' rates a solid pounding, 8 out of 10!