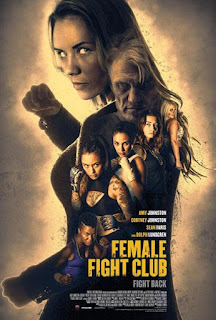 
The fantastic, and amazing Amy Johnston heads up this cast in yet another action film. Martial arts luminary Dolph Lundgrin portrays her father and is wrongly locked up for a crime and she vows to help him. Director Miguel A. Ferrer provides action and enough of a story along with co-writer
Anastazja Davis to engage the audience and push this low budget film slightly above Lady Bloodfight in terms of concept and execution. Actress Courtney Palm is a pro, and it shows, Dolph has some material but he is far from the focus. Sexy and talented Levy Tran provides some violence and many sultry tattoos for your viewing pleasure!

Bottom line on this flick is Amy Johnston has a real likable quality. She is fighting for her sister and she just has to go through many trials and issues. Amy has real skill when fighting and to the many reviewers who may pass this off as another women in skimpy clothes flick, step the hell down, cause Amy is the real deal. Sadly in order to sell these types of films, and not sure why, the ladies have to be in skimpy outfits. I mean if it is Summer in Thailand and 100 degrees fine. This is indoor action and, not sure what is up with that.

When Jesse V. Johnson's Accident Man unleashes sometime in 2018, the audience will witness an emergence in Amy, she will be a villain, no skimpy BS costume, just an ass whippin' for those who cross her. As stated before this film is actually better than Lady Bloodfight, mainly because it is story and character driven, even on the minimal budget.

I am not going to spoil this flick as I hate reviewers who wax on for 1000s of words, but what is important, is witnessing the emergence of a new action star that has moxy, grit and determination to be better, constantly striving at her craft. Female Fight Squad is another notch on her development belt, and when that belt is ready for a real whipping next year, someone will feel her wrath!

As for Female Fight Squad, it is a bit better, at 6.8 out of 10, still some more polishing to go, but Amy has her skills ready for the next adventure with a smile and speedy fists and kicks!

The film is available on Streaming platforms now in various territories.

Please search my site and The Action Elite for various Amy Johnston posts, sadly all of the current autographed photos are given away in the various contests,  sorry kids!